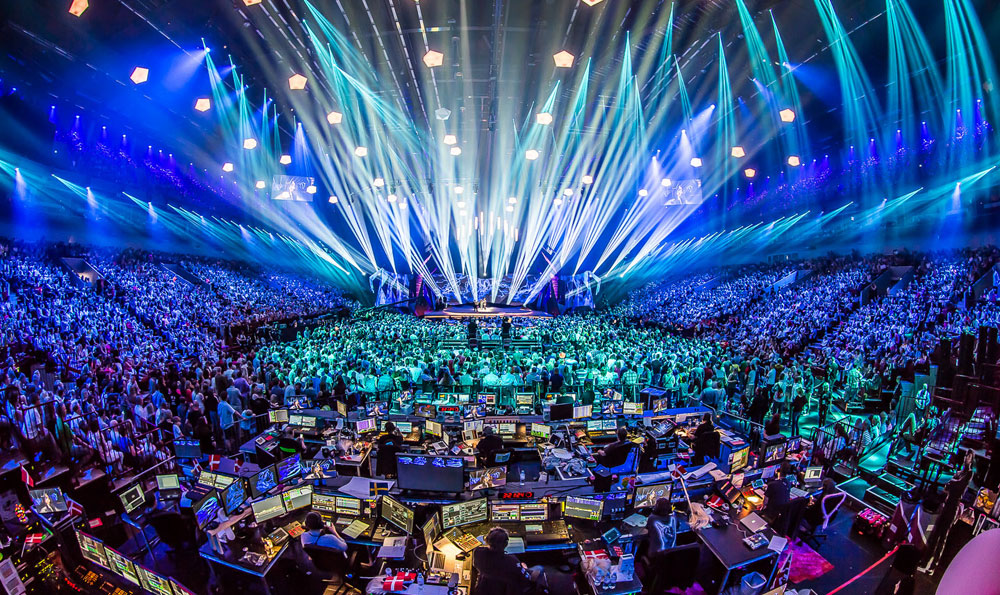 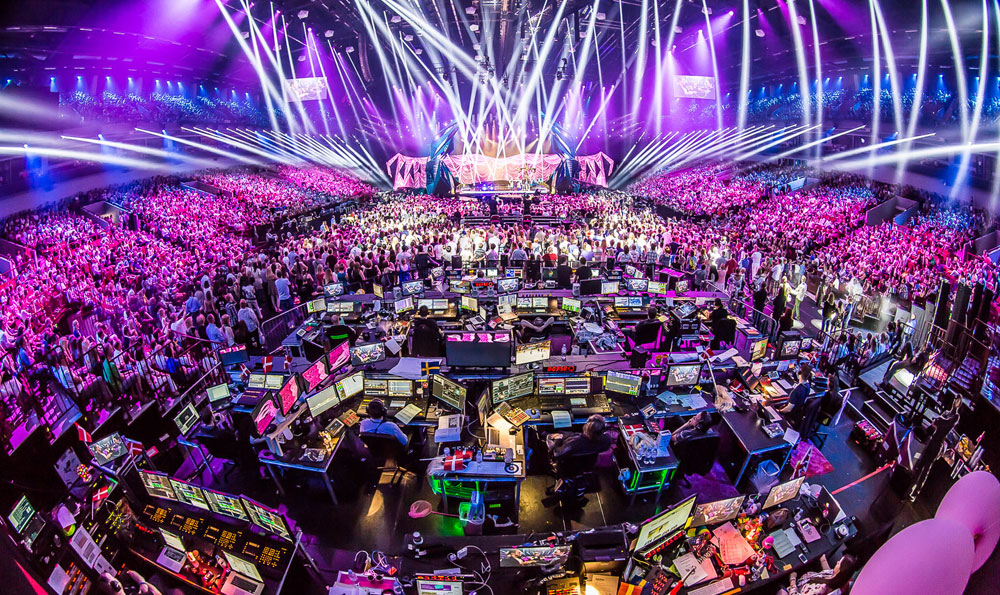 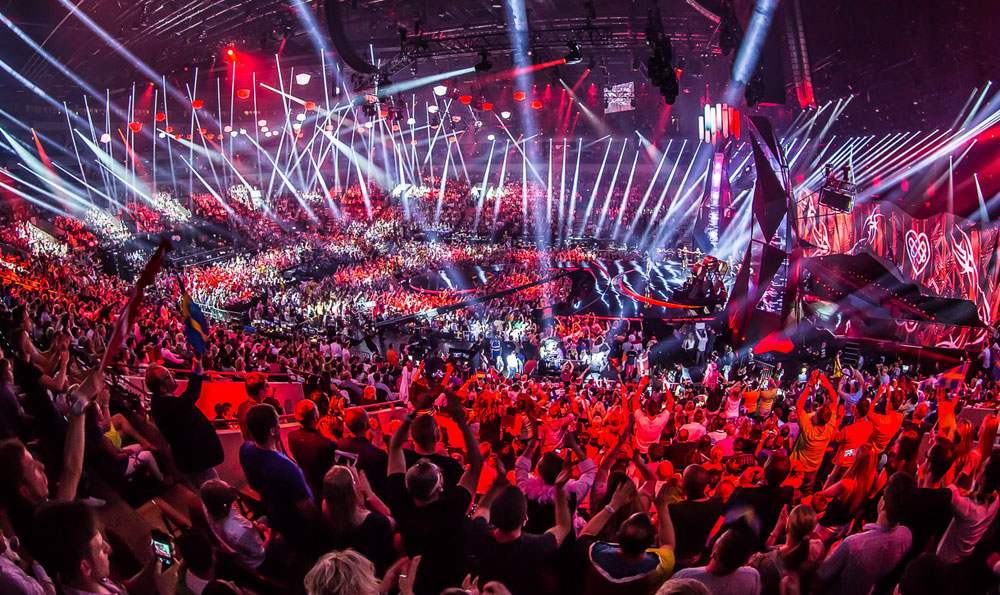 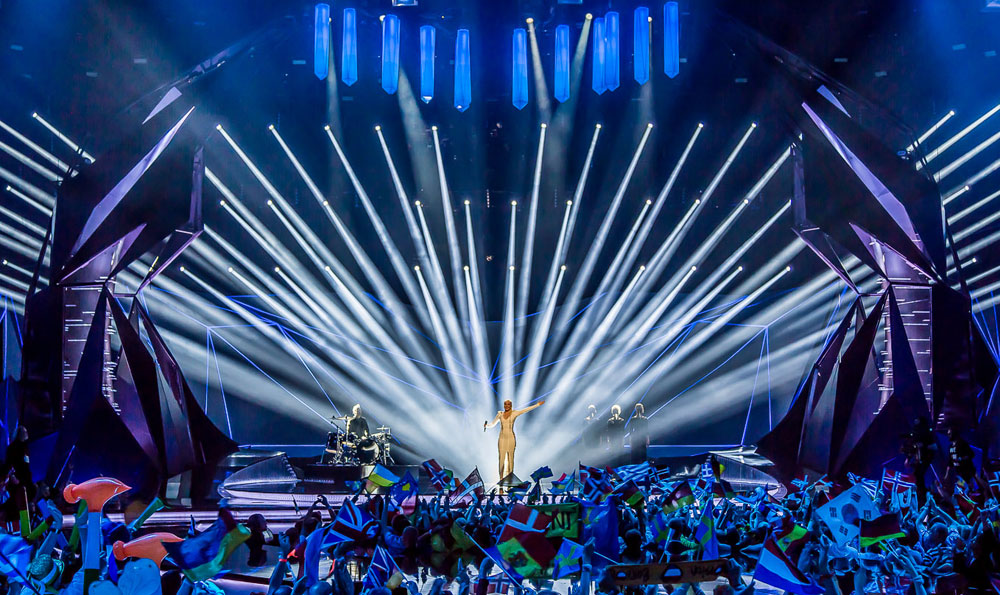 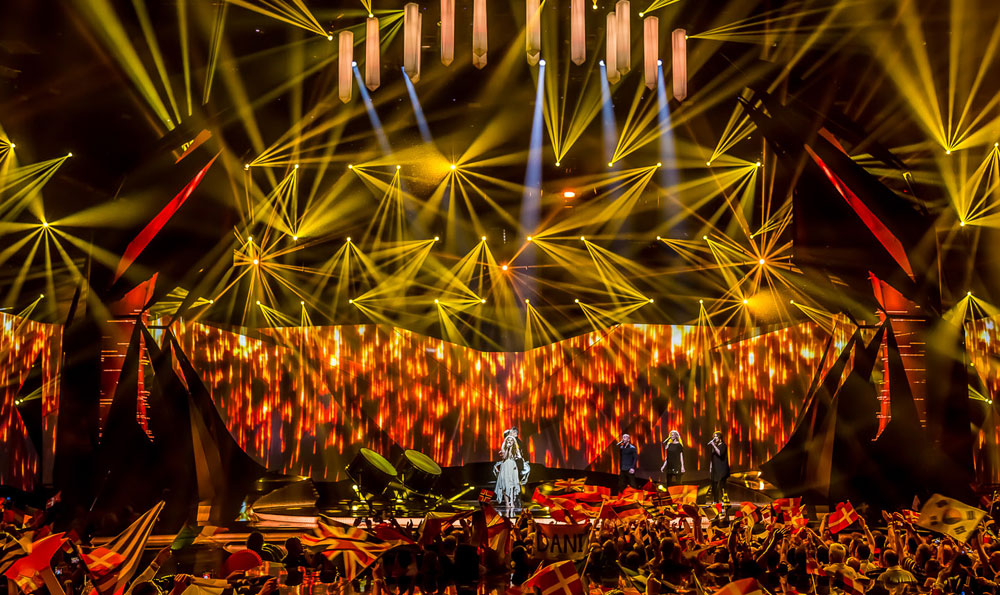 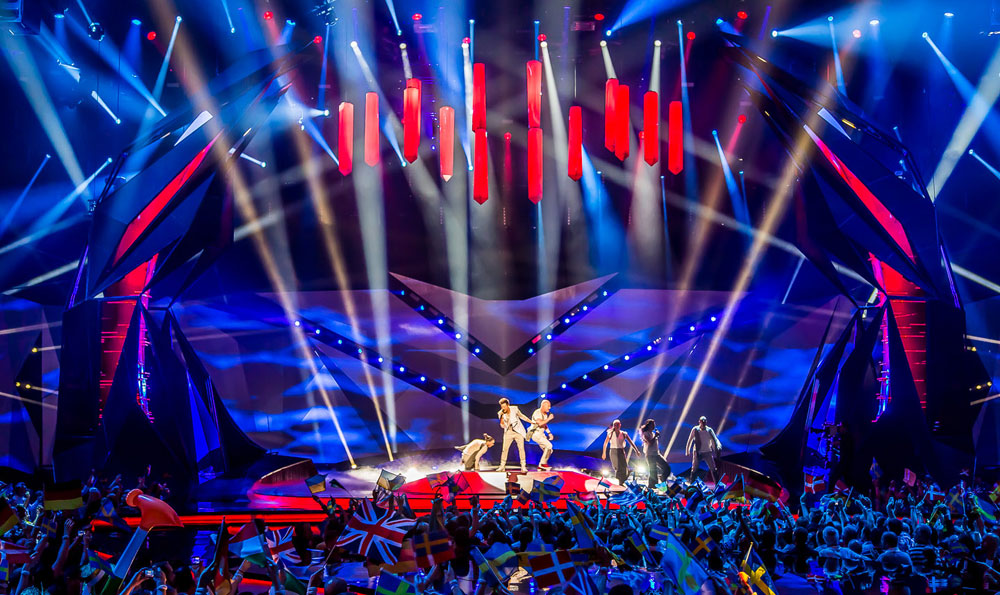 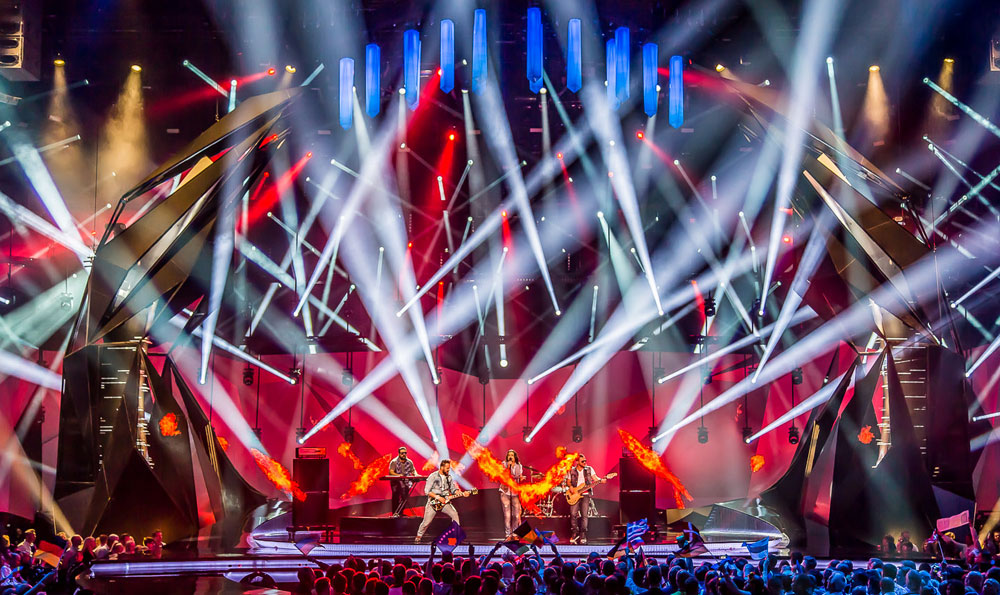 A total of 11 x grandMA2 light consoles were used for running lighting and video at the 2013 Eurovision Song Contest, staged at the Malmö Arena, Sweden. Four grandMA2 light consoles, plus four as backup, were controlling around 1,400 fixtures. The three video grandMA2 light, one as backup, were playing back content stored on 22 media servers via MA-Net2 feeding 28 x Barco HDQ-2K40 projectors. They had 94 million video pixels in the show and were running up to 16 video layers on the media servers. 4 x MA onPC command wing were used as well for technical support purposes.

The 2013 event took production, presentation and visual imagination to new heights of style, ambition and excellence under the technical direction of Ola Melzig. This stunning visuality was created by a carefully crafted blend of Fredrik Jönsson’s lighting, Mikki Kunttu’s video and the set designed by Viktor Brattstrom and Frieda Arvidsson.

The Final – won by Denmark, with Emmelie de Forests’s folksy “Only Teardrops” - was broadcast live on Swedish SVT1 to 44 countries, watched by in excess of 100 million viewers and enjoyed by a live audience of 10,500 excited Eurovision fans, who packed into Malmö Arena to experience another technically ground-breaking Eurovision and some superlative pop music!

Fredrik Jönsson explains that he chose an MA Lighting system – which incorporated 16 x MA NPU (Network Processing Unit) and 9 x MA NSP (Network Signal Processor) and 1 x grandMA2 fader wing for himself as well – because it enabled his four operators to work independently in their own sessions on different elements of the show. No other system allows this flexibility. The four utilised individual Cubase projects to generate their own Timecode during this process, and when their modifications were completed, they switched back into the ‘general’ show Timecode. During preprogramming the previsualization of the show was done via the free of charge grandMA 3D software which saved the programming team on-site a lot of time.

This extremely expedient way of working was an absolute key to Jönsson and his team being able to achieve the very complex programming required to develop the show under serious pressure in the given timescale. The competition started off with 39 countries which were whittled down – via two live televised semi-finals in the week ahead of the final - to 26 Finalists.

Each had to look dynamic, distinctive and be lit perfectly for camera and TV as well as having plenty of WOW factors to impress the live audience. The ideas and requests of each individual delegation were also discussed in depth with Jönsson and Kunttu as each artists’ performance was fine-tuned once the full technical rehearsal period started.

In addition to the 1,400 lighting fixtures – which included a variety of the latest Clay Paky Sharpy Wash, Sharpy Beam, Alpha Profile 1500, Alpha Spot QWO 800 ST, A.leda K10 and GlowUp Strip as well as Vari*Lite moving lights, one of the lighting grandMA2 light was also controlling 48 customised winches (made by Tait Technologies) which were flying individual pixel-lanterns above the audience. That same console was also running another 14 winches flying in and out illuminated ‘icicle’ tubes over the stage which were lowered in to make the space more intimate.

Mikki Kunttu created eye-catching original video content and projected wide-screen visuals for 38 of the contestants in a dynamic aesthetic departure from LED, which was an original request from the executive producers.

He worked with two very experienced operators who were running the same show-file in the same session, effectively four hands and four sets of eyes but one operator. Kunttu, who actually owns two grandMA2 lights of his own, uses the platform for all his video and lighting projects, “The grandMA2 is fast, reliable and creative”, he asserts.

The Eurovisuals team (lighting & video) spent three weeks pre-programming the show at SVT HQ in Stockholm before moving to Malmö Arena a month ahead of the Final, with a gruelling full rehearsal schedule constantly for the last two weeks.

The lighting programmers were Danne Persson, Timo Kauristo, Calle Brattberg and Pontus “Bullen” Lagerbielke – all highly talented and three of them owning their own grandMA2 consoles. In pre-production Marcus Krömer assisted with the 3D visualization which was created by QConcept using grandMA 3D.

With five custom built computers supplied by MA Lighting and one from Starlight for Jönsson, whilst in pre-production each lighting programmer had their own grandMA 3D system and all the DMX universes were sent to Jönsson’s computer that merged the incoming data into one show. That way he could see the combined output from all four sessions.

On site, Jönsson worked alongside assistant lighting designer Emma Landare, who coordinated lighting all the interval and opening acts, the large green room area also with a live audience for the broadcasts and other periphery areas.

Kulan Wallertz called the 14 follow spots, with the iris and colour channels being controlled through one of the grandMA2 lights and the intensity through a separate manual desk – so effectively all the operators had to do was point the hardware.

For video, the grandMA2 light programmers were Neil Trenell and Mikko Linnavuori. The grandMA2 system and network technician was Nicolai Gubi Schmidt, and the consoles were supplied to the event by PRG / Starlight.