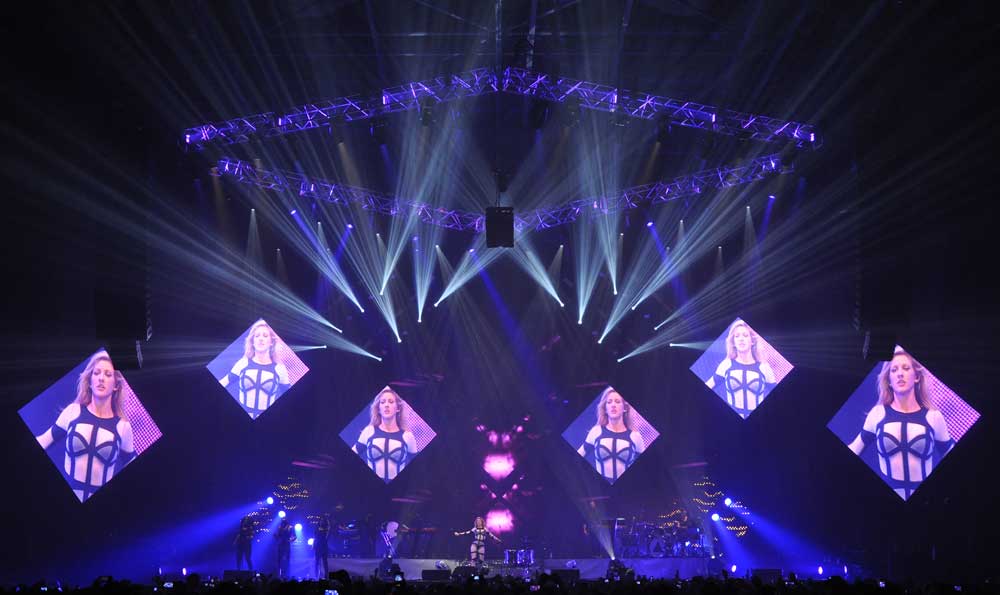 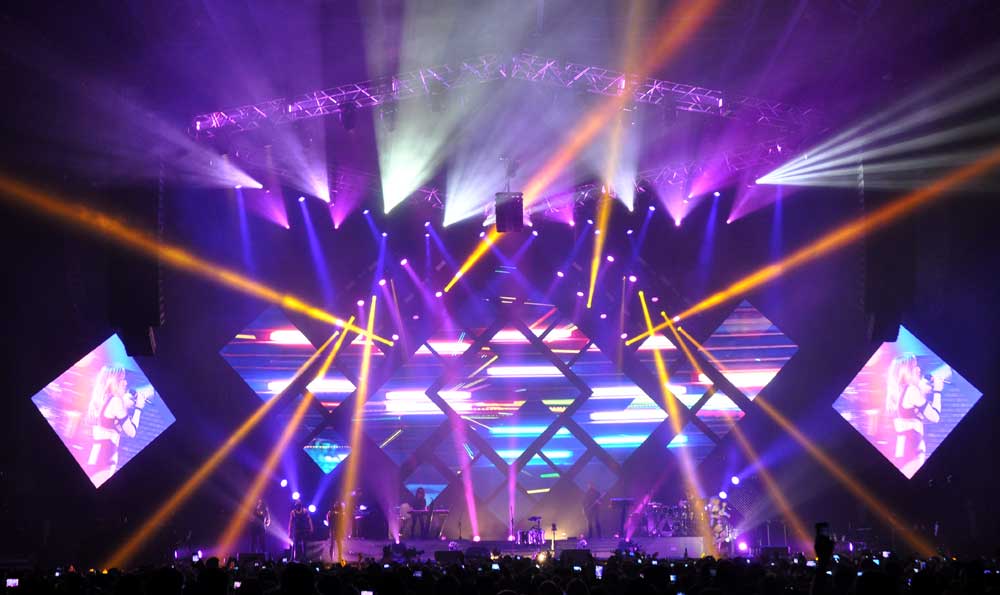 His first time working as a video director, lighting man Robin Haddow has set himself some high hurdles in the way he manages the English singer-songwriter, multi-instrumentalist and actress Ellie Goulding show for lighting designer Cate Carter. “There are multiple screens hanging at various heights all over the rig. I’m using a grandMA2 full-size to map the content to the screens. Having used lots of different desks I’d say it’s the perfect surface for the job”, Haddow reported.

“I approached the grandMA2 initially as if it were just like any other desk with which I’m familiar, but it’s not. In fact I struggled at first but eventually I found that all I needed to do was switch to the MA way of thinking. It has a sort of German logic to it, and I mean that in an affectionate way. Once I’d shifted my thinking then I began to see the potential.”

Haddow continues: “Writing your own macros is advantageous on any desk, but in grandMA2 you can create stacks of macros that in essence give you something akin to writing your own programme; that has proved immensely useful. With six cameras on the show I wanted all the performers to know which camera was ‘live’, so if they felt like it they knew when to play to camera. But in the absence of a dedicated PPU, the camera tally system that illuminates the red light of whichever camera is live doesn’t function.”

“With some guidance from XL Video the solution I figured out started from a simple position. The grandMA2 lends itself to being used as a virtual switcher/vision mixer for video in its physical layout. Take the user defined keys (or the ‘X-Keys’) at the centre of the desk: I set the upper row as my basic (TX) bus, the lower row as my camera preview (PVW) bus. The larger main executor faders to the left of the X keys I use as what would be a T-Bar on a traditional video mixer, allowing me to cross fade between the TX and PVW busses. So once I’d figured out the mechanics of triggering the tally system from desk, basically through Cat’ to Camera via a USB relay, it became simple. Essentially, because I drew up a particular camera into preview, the desk could tell where I was going next and initiated the tally indicator as I moved to cross fade.”

“I’m more a trial and error person. I like to figure things out for myself”, explains Haddow. “It takes a while but again the desk lends itself to my approach, and when you make mistakes they’re simple to spot and fix. With the tally system I discovered I needed to insert a 0.1 second delay in the macro file to trigger the command when I made the cross-fade. You learn a lot doing things this way.”

Haddow will take over running the whole show when the tour moves to the US and Carter leaves to light Elbow’s next outing. “Of course I’m already very familiar with the show. We have moved this design through many different venues, when working with Cate on the main show-file you set up your own user profile and you can create worlds. That means you can make parts of the rig mutually exclusive so I can be working on say, the video content through the screens, Cate can be touching up lighting focuses, and in separate worlds. Although we are both editing the main show-file, neither of us can touch the others domain. That’s very reassuring. I’m really looking forward to taking over in the US.”

Ambersphere is the exclusive UK sales, service, support and training centre for MA Lighting products. The lighting equipment was supplied by Lite Alternative.