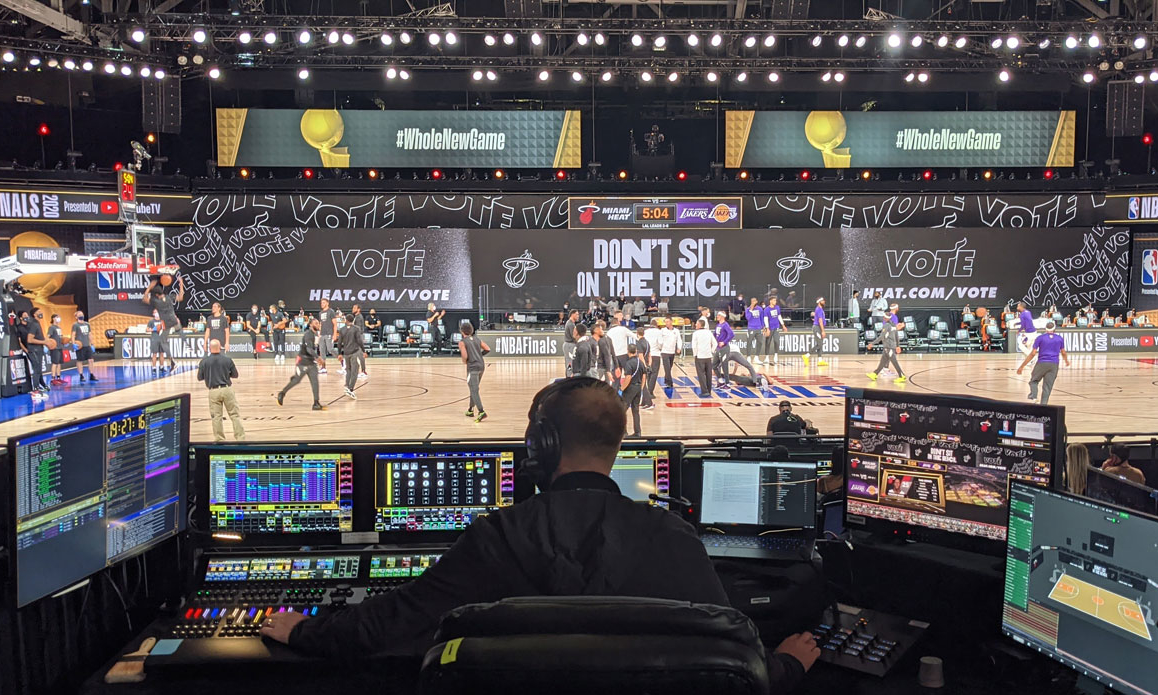 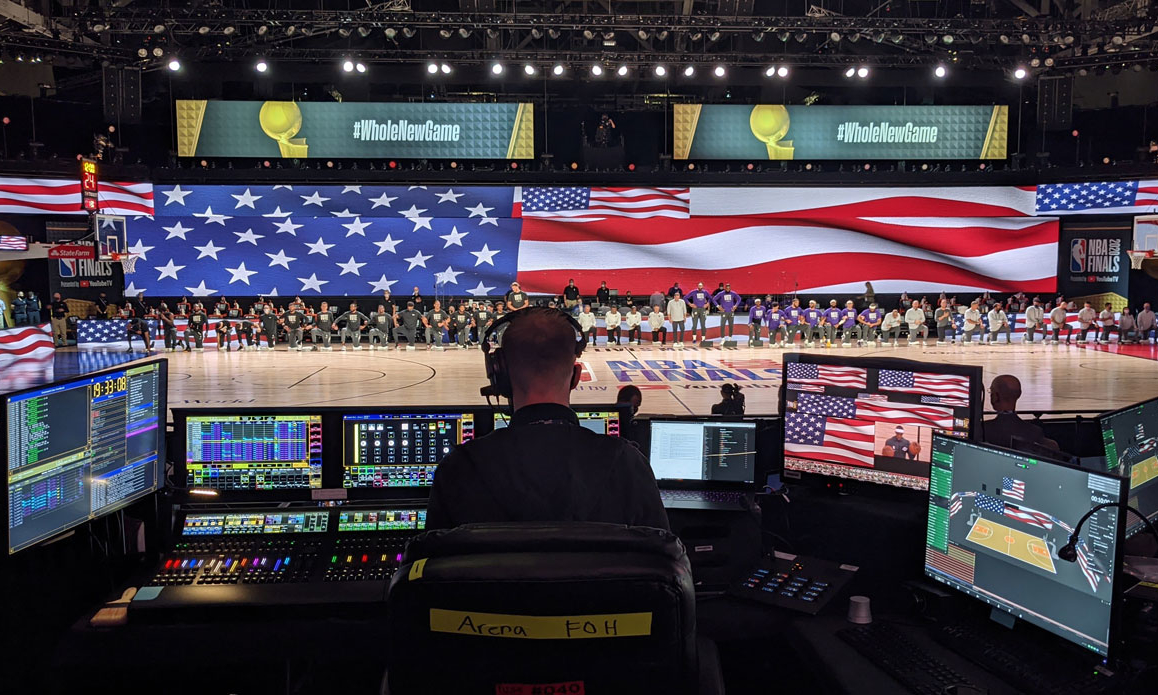 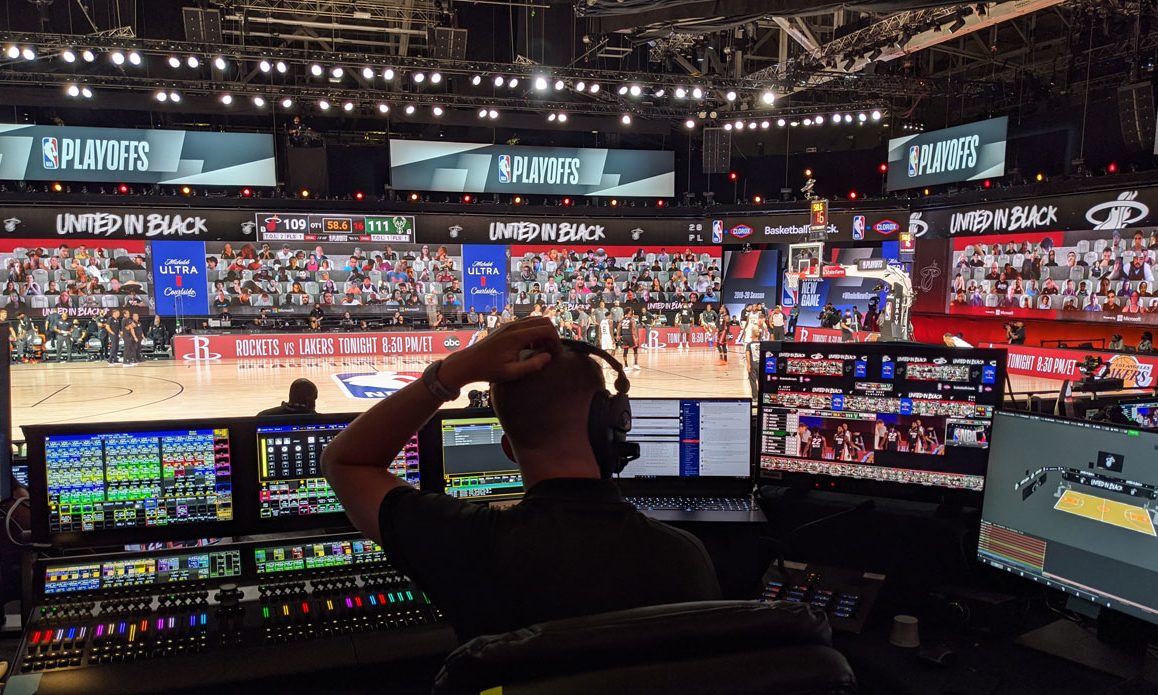 When professional basketball resumed in the US during the coronavirus pandemic, the NBA protected its players by establishing a “bubble” isolation zone at Walt Disney World near Orlando, Florida. Although the general public was not permitted in the stands at ESPN’s Wide World of Sports Complex where the games were held, fans were glad to be able to watch the season’s televised final games and the playoffs once again.

Fuse Technical Group, which supplied all the court video systems, provided four programmers with an arsenal of grandMA hardware to play back and trigger various assets and effects during the games: 5 x grandMA3 full-size units with 1 x MA NPU (Network Processing Unit) plus 2 x grandMA2 full-size and 1 x grandMA2 light consoles, the latter as backup systems and the tech desk.

Three basketball courts were created in the sports complex with giant, wraparound LED video screens topped by graphics displays. A pre-recorded national anthem as well as player intros were displayed on the massive screens before the start of games and virtual fans were shown enjoying and reacting to game play. To customize the courts for the designated “home team,” a database of music, audio cues and graphics that the teams would ordinarily use in their home arenas was used – with the dynamic audio and video elements building in intensity as the playoffs progressed.

“The NBA wanted to create an interesting on-camera experience that would engage as many fans as possible. The solution they arrived at was to line the courts with a U-shaped LED arrangement,” says programmer Jeremy Lechterman, principal of FragmentNine, a live event creative direction company.  “That high-resolution element was primarily used to display team content and the virtual fans while a low-res ribbon element was hung above to simulate traditional in-arena video.” In addition, a scoreboard element, about one-quarter the size of a typical center-hung arena scoreboard, was set on the side under the camera platform primarily for coaches and players.

The grandMA3s were programmed to integrate with 13 disguise gx 2c media servers, which handled the teams’ screens content, and a Barco E2 system, which switched the virtual fans, the disguise team content, stats, and the program cut from broadcast.

“During the seeding games, which were an extension of the regular season, all three courts were running concurrently with up to seven games a day,” notes programmer Michael “Hank” Hankowsky.

“This was the first time any of us [programmers] had done sports and the first time this format was used,” Lechterman points out. He and Hankowsky were joined in the bubble by programmers Jackson Gallagher and Charles Dabezies.

“The grandMA3 is not the system typically used in these teams’ home arenas to handle video,” Lechterman points out. “None of the usual in-arena systems could be used in the bubble where we needed to serve up content for 22 teams and have multiple simultaneous users. Without the grandMA3 there wouldn’t have been a solution.”

Early on when the programmers were in quarantine Lechterman had one of the grandMA3s in his hotel room. “We had multiple exhaustive Zoom calls with all the team reps making the content so we could play it back for them and they could see it in the 3D environment that was replacing the broadcast experience,” he explains.

It quickly became clear to the programmers that given the size and scope of the game play, “the whole system needed to be one giant session, one giant show file,” instead of 22 show files one for each season-starting team, which “would have been a nightmare,” Lechterman says. “We needed to move things between venues very fast so all 22 shows were built into one show file and all the venues were networked together.”

The NBA restart marked the first time any of the programmers had used grandMA3 hardware for a long-term show although the grandMA3 is their platform of choice.  “We came to the grandMA3 with muscle memory from the grandMA2, and it didn’t take us long to adapt to the grandMA3,” says Lechterman.

He gives kudos to the grandMA3’s multi-user environment – something not found on other platforms.  “We had four programmers working independently at the same time and handing the programming seamlessly,” Lechterman reports. “We built a complex series of macros to achieve this, but we were able to program four games simultaneously without stepping on each other.”

Hankowsky notes that the programmers had tallied a staggering “7,000 individual clips by the middle of the process. The grandMA3 is so extensible; we could write custom script to automate a lot of the data entries. Then with data and preprogrammed looks in the desk we could copy and paste them where we needed them.”

“It was amazing the way Hank really scripted the consoles,” says Chris Peterson, Vice President of Entertainment at Fuse Technical Group. “The ability to parse large amounts of data and build huge cue lists was instrumental in the success of this job.”

During the seeding games the programmers typically worked games at FOH alongside a screens producer representing their own team’s in-arena presentation. The screens producers were armed with Novation Launchpad X MIDI loaded with in-game reactive elements such as player headshots and animations for a three-pointer or a spectacular dunk. “Because they understood basketball better than we did, they could trigger those elements on their own in the grandMA3 via the MIDI pad,” Lechterman explains. “While we were handling the big switching elements – the virtual fans, the video packages, time-out highlight reels – they could quickly trigger all the game play reactions.”

Additionally, “On the corner screens in the ribbons, we were tasked with displaying and changing sponsor advertisements and specific intervals on the game clock,” says Lechterman. “This was accomplished with Cycling 74’s Max 8, which read the incoming game clock signal from Mixon Stats and sent DMX triggers to the consoles. System Engineer Josh Flitel also wrote a Universe show control file to give us full access to the E2s and routers from the desk. The entire show could be run using the grandMA3 as the only control surface. Josh did an incredible job building out this handshake between all the parts of the system.”

Content was constantly upgraded as the season progressed and milestones were marked. “As of September 10th the media managed totaled 14,200 individual video clips,” Hankowsky reports.  “Changes were still being made as we reached the Eastern Conference finals. Having the grandMA3’s flexibility to make changes on the fly was invaluable.  Everyone was very pleased with the system’s performance.”

Lechterman says that ACT Lighting provided “A+ level support all around” for the NBA’s resumed season.  “The first couple of weeks I’d call ACT’s software support manager Ryan Kanarek for gut checks that what we were doing was okay and to get help with any head scratchers,” he recalls.  “We got some pretty in depth macros to make it all work seamlessly; even MA Lighting’s German headquarters contributed.  Also, special thanks to Philip Norfolk at UK-based Ambersphere Solutions for his grandMA3 support.”

For his part, Fuse’s Peterson was “happy to put some of our brand new grandMA3s to use during the pandemic. The NBA bubble was a successful strategy all the way around.”

ACT Lighting Inc. is the exclusive distributor of MA Lighting products in the USA and Canada.