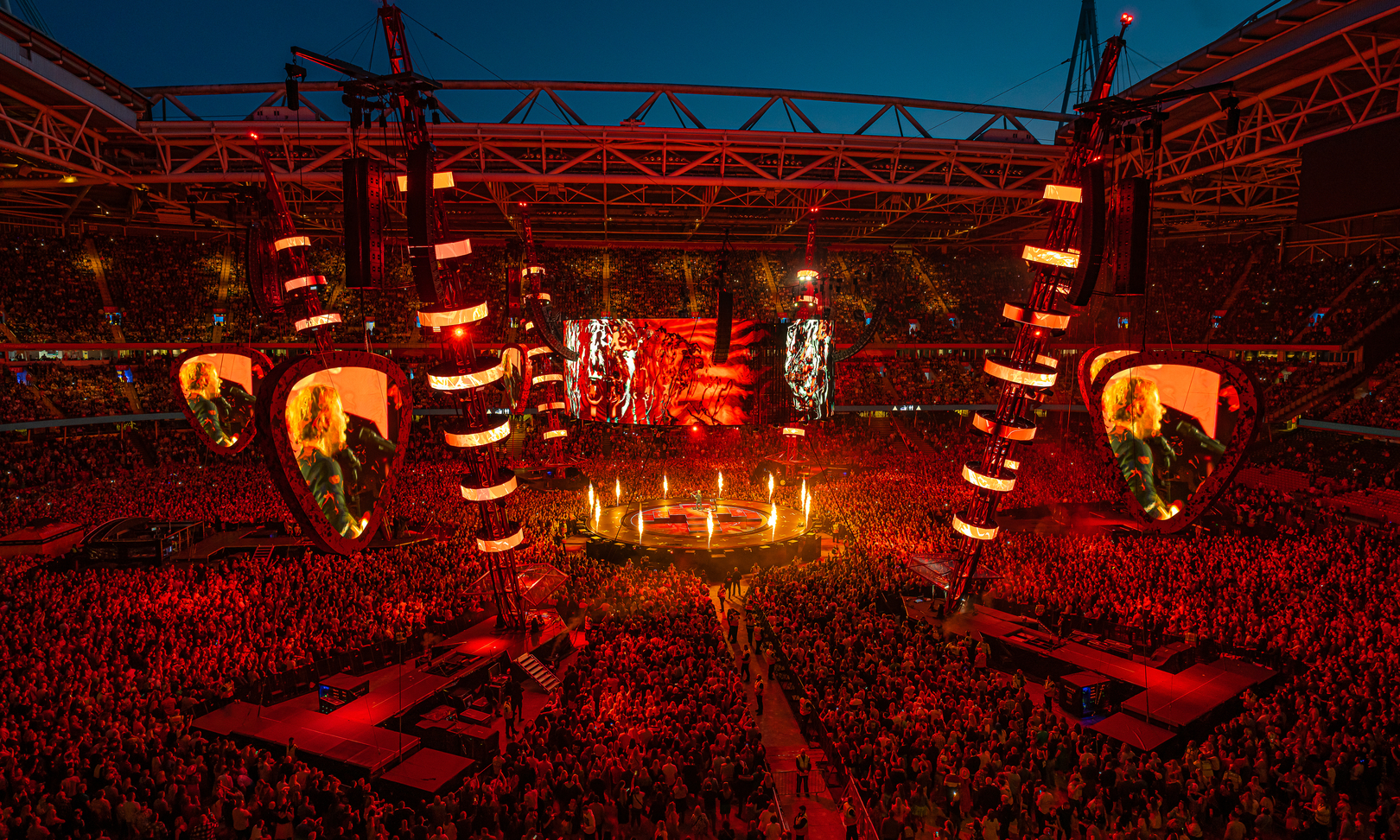 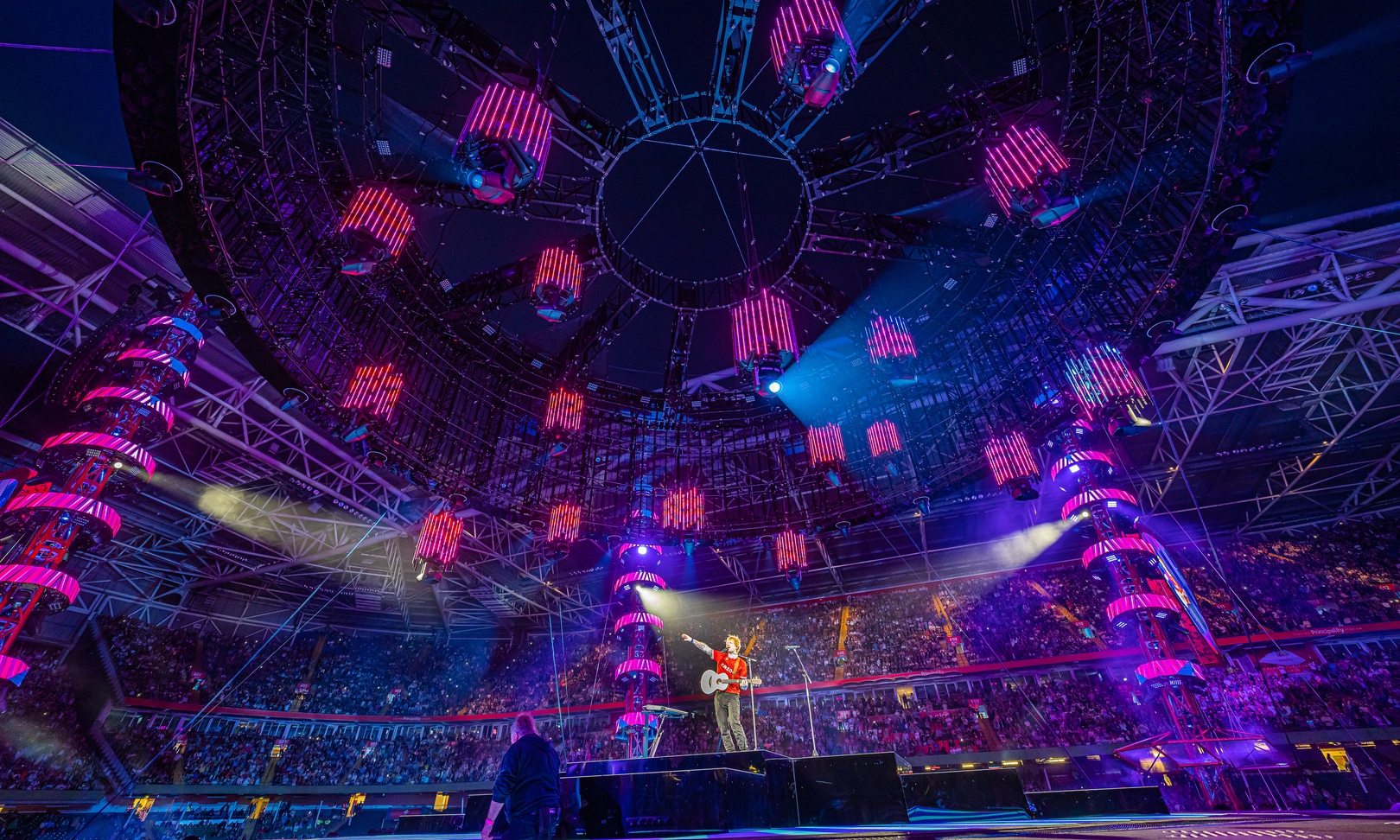 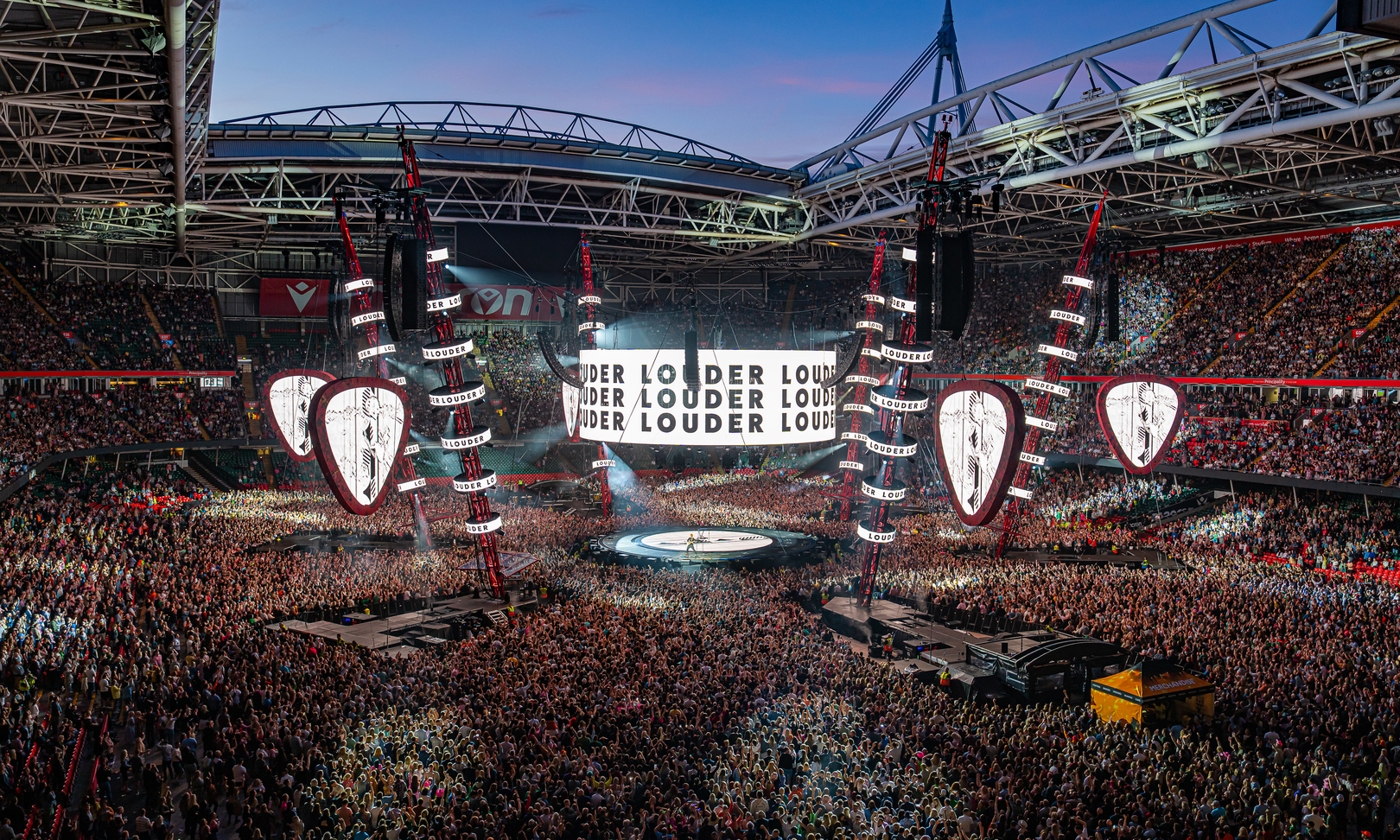 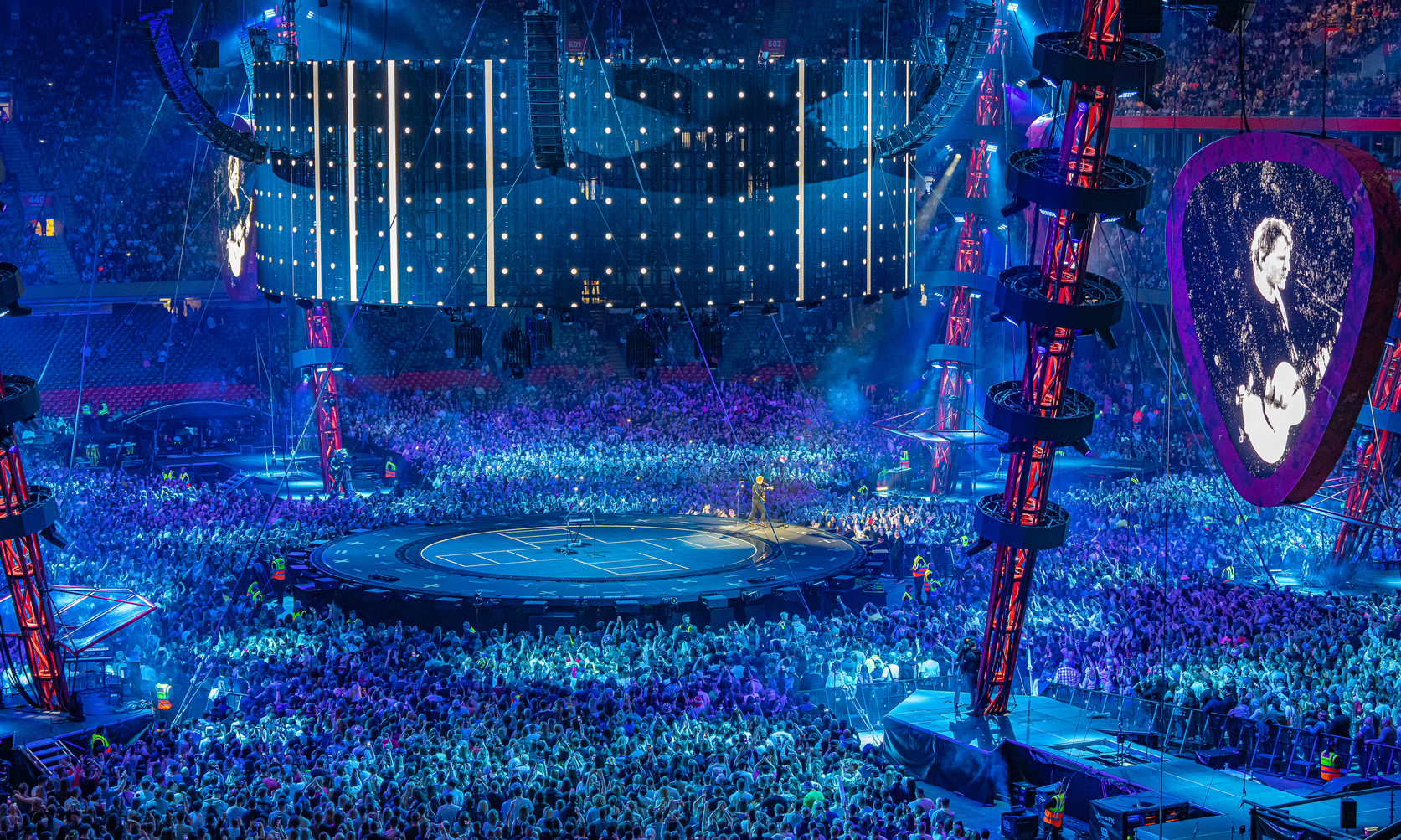 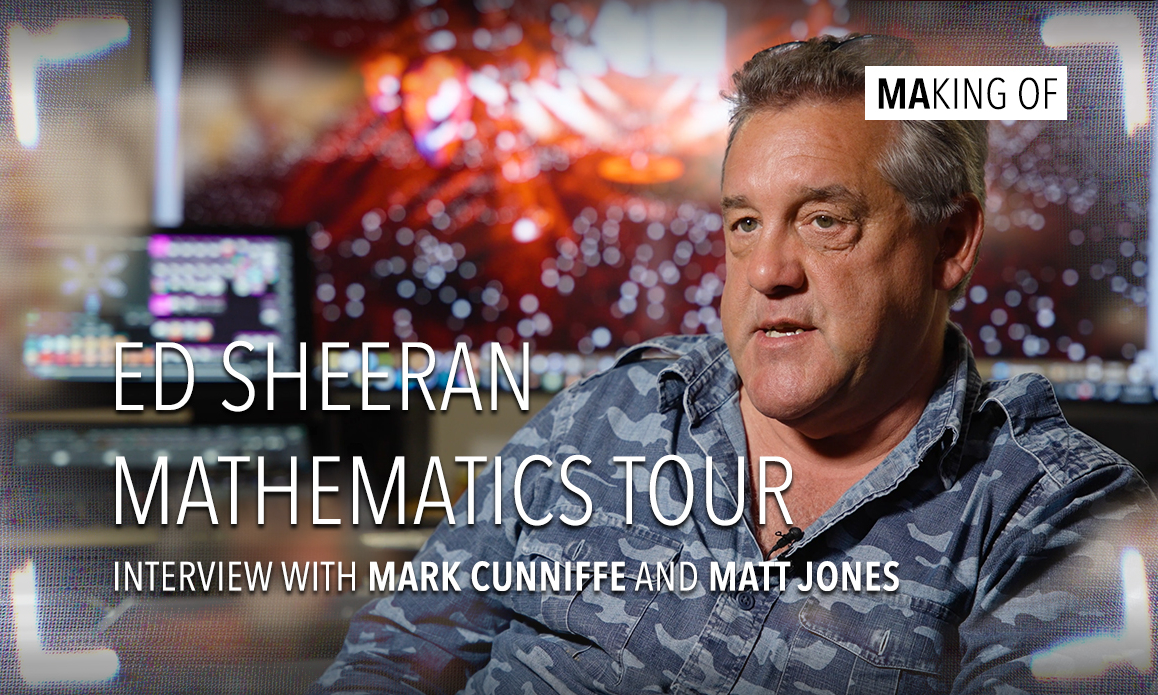 Everyone is talking about Ed Sheeran’s “+-=÷x” stadium world tour for multiple reasons, from the music and his amazing communication with his fans to his constant and universal appeal to his ability to make a stadium show feel as intimate and personal an experience as a smoky backstreet club.

Mark Cunniffe’s stunning production and lighting design are also turning heads and bringing new levels of innovation and WOW factors to the world of in-the-round staging, and Mark also decided that this much anticipated and high-profile tour was the time to switch to a full grandMA3 system for running lighting and video.

He specified two grandMA3 full-size and two grandMA3 light consoles complete with six processing units, all running grandMA3 software and supplied by award-winning lighting rental specialist LCR. The company is hot from winning the 2022 TPi Award for ‘Favourite Lighting Rental Company’ for the second year in a row.

To achieve the ambitious goal of a clean and minimalist performance area right in the centre of the stadium minus any traditional trussing or metalwork structures, Mark designed six elegant 32-metre-high masts, which support audio, lighting and six plectrum shaped double sided video screens.

These are connected and safely accessed by technical crew via a vast cable-net tensioned wire grid. An awesome aesthetic solution that maintains sightlines without a stick of trussing or conventional ground support in sight! This ingenious aesthetic feat was then developed into a tourable production system by Jeremy Lloyd of Wonder Works and Rasti Bartek of engineering consultancy, Cundall, and was manufactured by Stage One. The production can be constructed in 2.5 days and dismantled in a day.

Over 300 moving lights grace the plot, plus 520 linear video fixtures, which in addition to the playback video and IMAG mix – cut by Phil Mead – are running through four disguise servers on 6 x HD feeds.

Each mast features 7 concentric scenic rings faced in video product onto which the majority of the lighting system is rigged.

The tour is designed with a lifespan of a few years rather than weeks or months so Mark knew it needed the latest and most powerful technology that can be supported globally … which prompted the conversation about grandMA3 with his FOH team comprising two “highly gifted” programmers, Alex Passmore (lighting) and Matt Jones (video). Matt is also out on the road operating lighting, with video operated by Ben Lapworth.

Mark, Alex and Matt collectively made the decision to go with grandMA3. “Running the latest grandMA3 hardware was never in question,” noted Mark, “so this was rapidly followed by the conversation about running in software version 2 or 3.”

“It’s a bold, rambunctious lighting design,” he said describing the lighting aesthetic, “ideal for stadium presentation and full of BIG, majestic, sumptuous looks, large all-encompassing brushstrokes,” and with this as the overall visual environment, he thought it was an “ideal time to go with an all grandMA3 set up.”

“It’s been a straightforward and smooth process for everyone involved,” he confirms, adding that they received some great support from MA’s exclusive UK distributor, Ambersphere Solutions.

Naturally, he was always quietly confident that all would go according to plan, or he would never have suggested it with such high stakes, but grandMA3 is proving an “excellent” decision.

Lighting and video are run via two separate fibre networks, so the consoles are fully interchangeable and inter-programmable as well as the set up providing full redundancy. One grandMA3 is running the lights while the other is triggering the four video servers using 6 x HD outputs as well as all the Notch treatment and processing.

The show is run completely live not timecoded, so it’s really important for the operators to have a great sense of music and rhythm as well as being aces on the consoles.

Ed Sheeran himself also triggers some ‘big moment’ lighting effects utilizing the grandMA3 I/O Node to which he sends a MIDI note from his pedals, and it fires lighting cues during three songs, “Bloodstream,” “You Need Me” and the show opener, “Tides”.

The tour continues in the UK and Europe through summer and autumn, with dates booked for Australia and New Zealand for early 2023.

The tour’s production director and FOH sound engineer is Chris Marsh, Helen Himmons is the production manager and stage manager Matt Caley is keeping everything in order in the performance area. The assistant designer is Matt Cromwell.