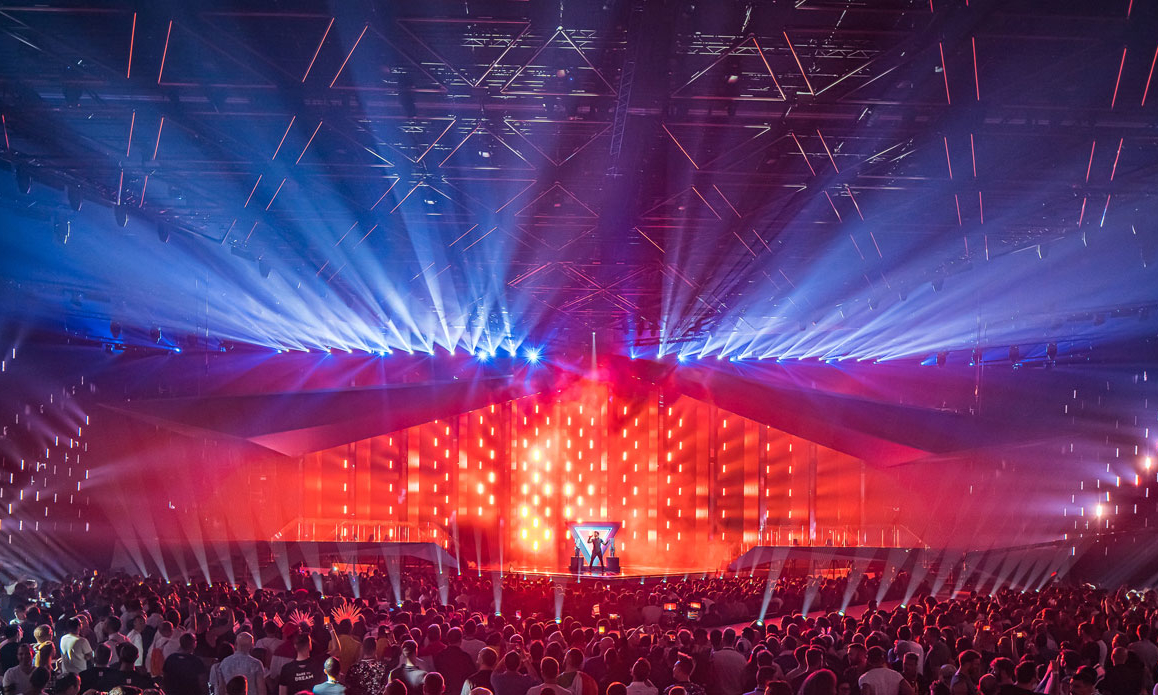 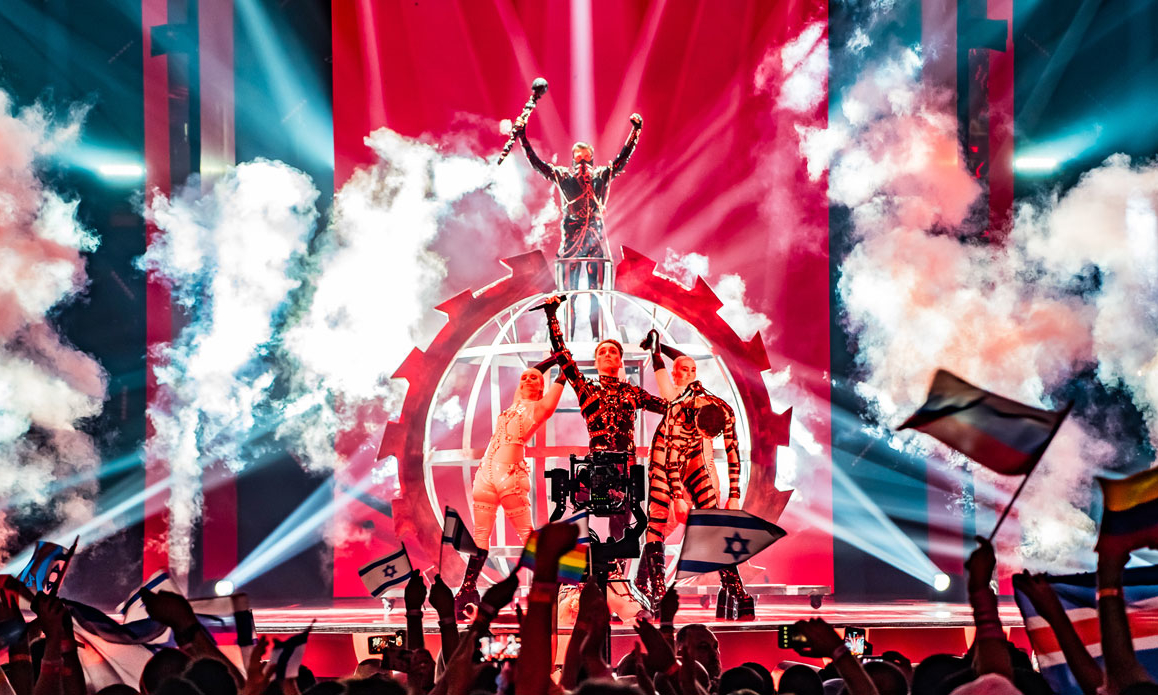 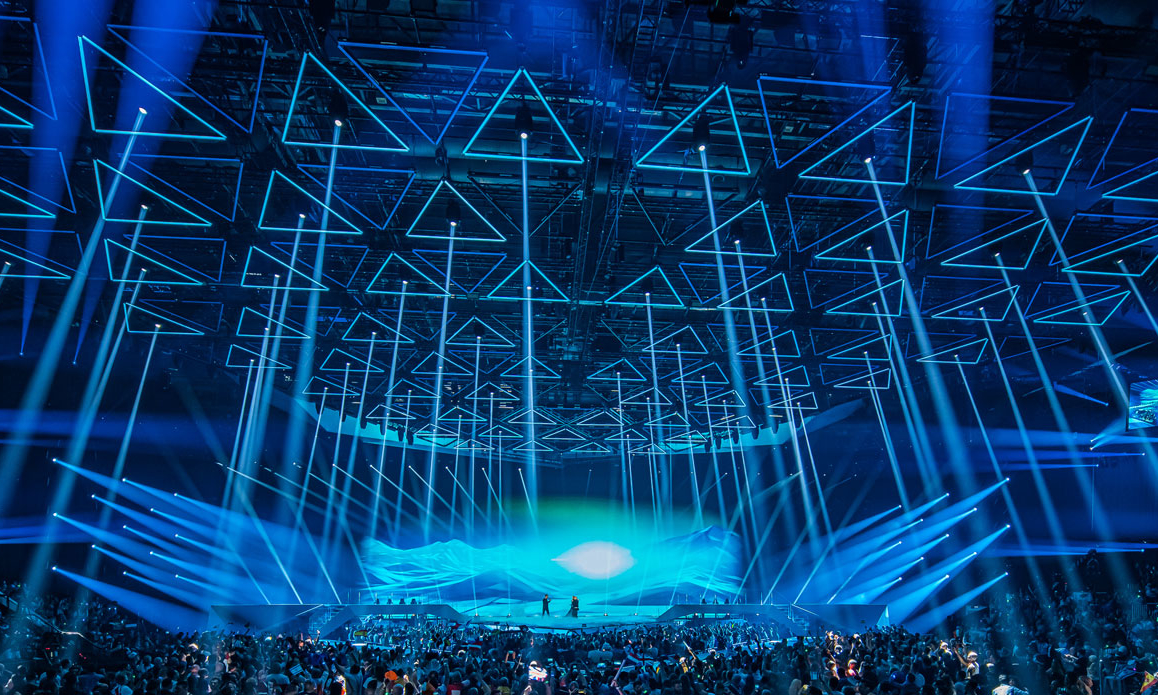 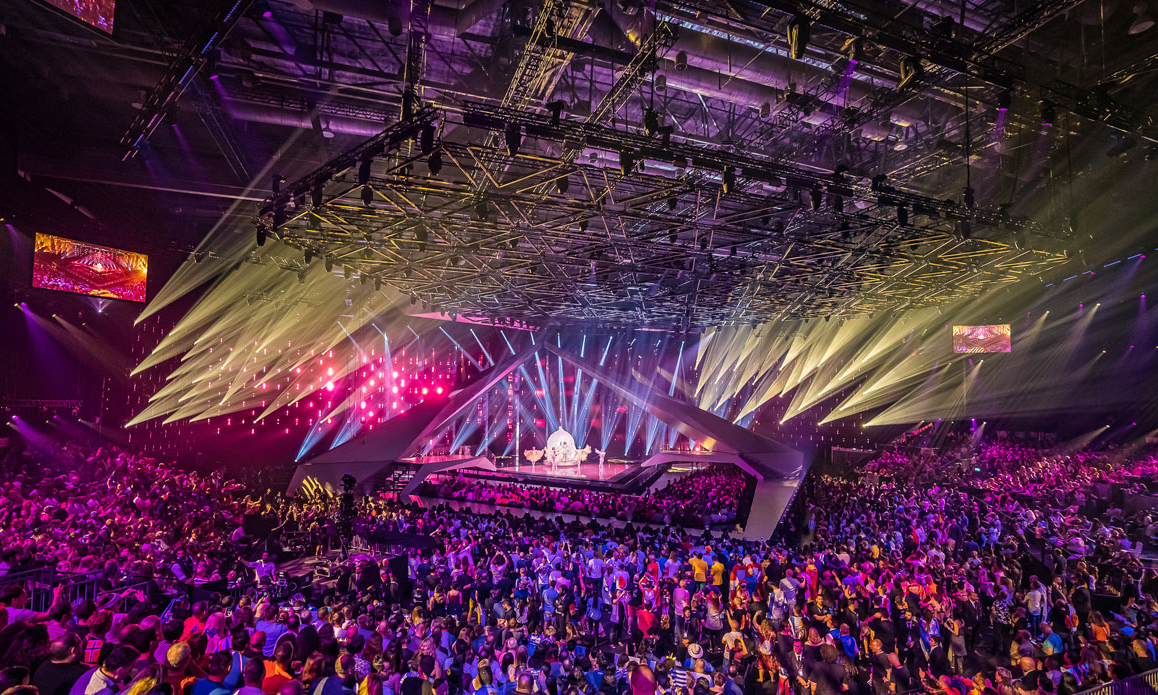 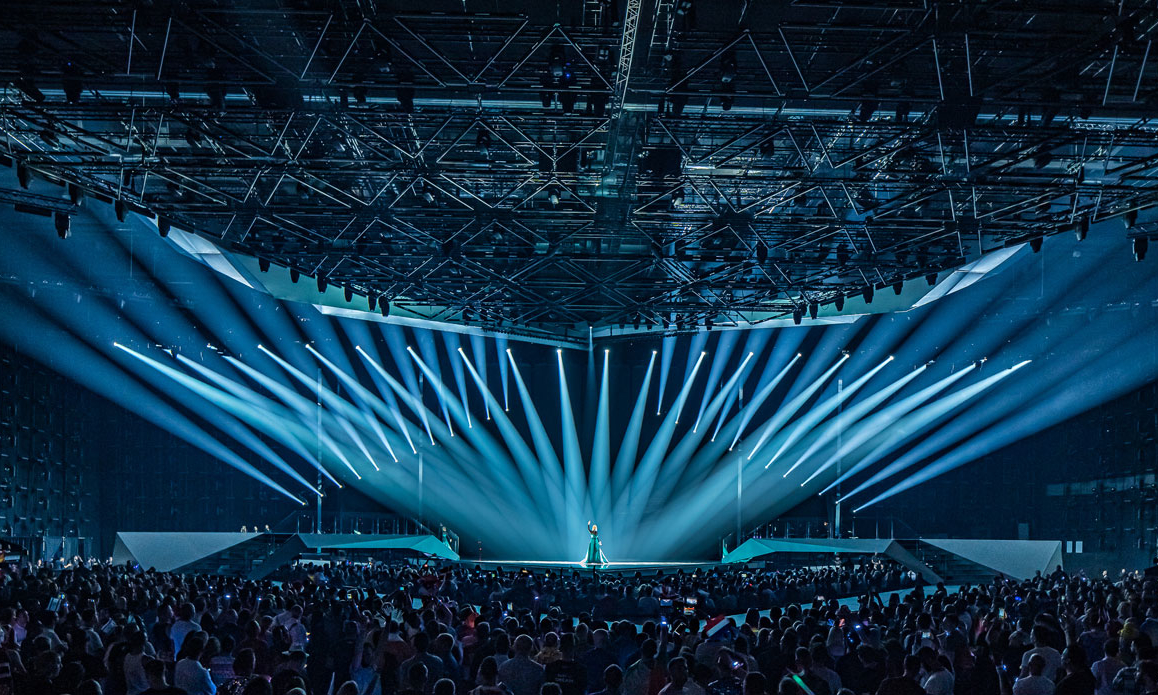 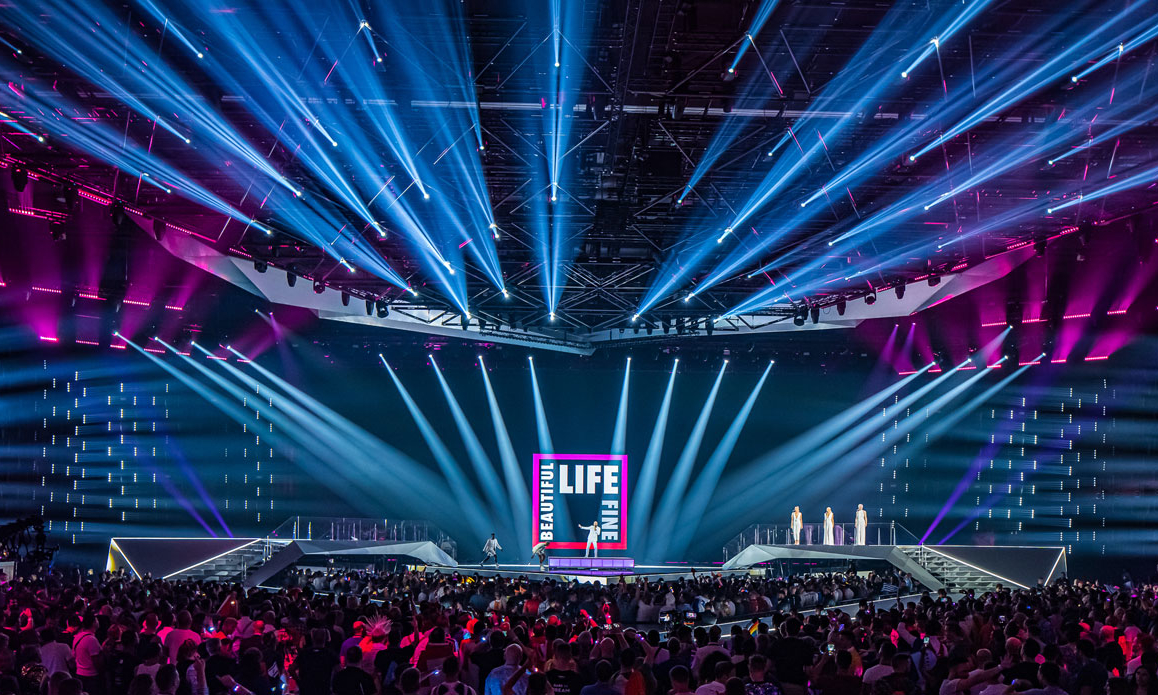 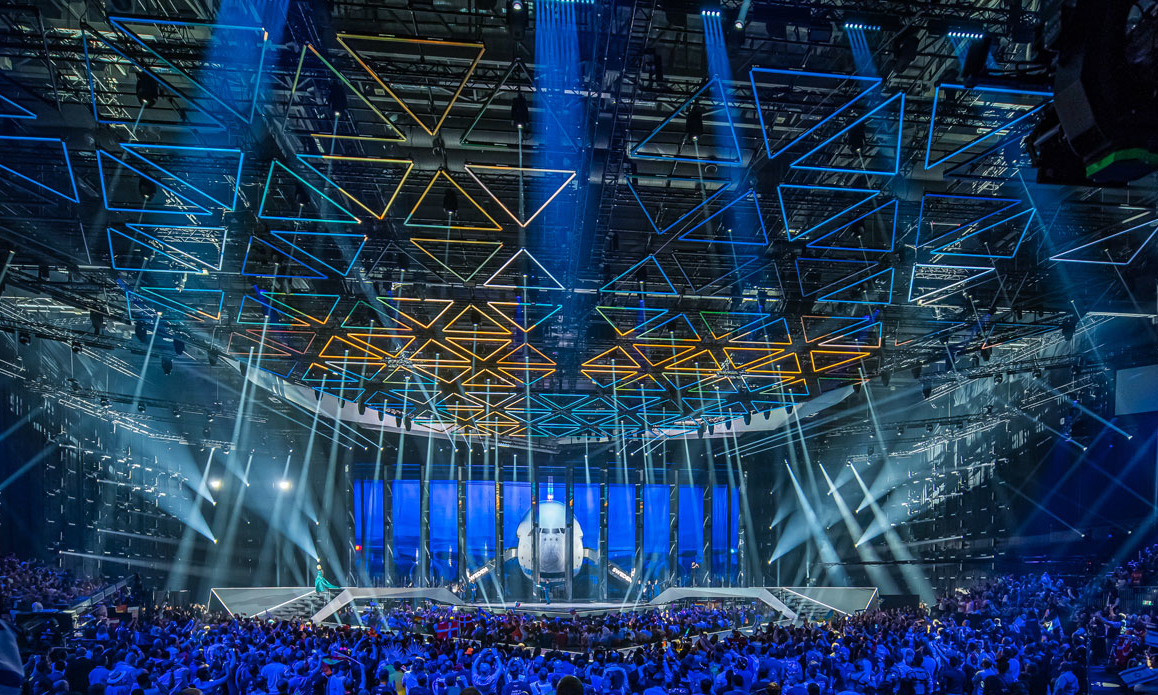 MA Lighting was once again the control solution of choice for the 2019 Eurovision Song Contest staged at the Tel Aviv Expo Centre, Israel, which featured a stunning lighting design created by Ronen Najar and Dakar Azulay. Twenty-six countries battled out the final whittled down from 41 original entries, watched live by a worldwide audience of around 200 million enthusiastic fans plus 7,500 in the arena, Hall 2 at the Expo Centre.

No less than 15 grandMA2 consoles graced the FOH technical area, controlling 71,061 parameters and a mix of over 2,500 light sources and LED fixtures.

These were lighting the main stage – another elegant design by Florian Wieder – the auditorium and the green room. As any ESC fan will know, the green room is a vital area for the broadcast, capturing the emotional thrills and spills of the delegations as the points are awarded and they yoyo up and down the leader board!

MA was chosen by several on the creative and technical team co-ordinated by ESC’s head of production Ola Melzig, including Jack Collins, the event’s lighting systems and control specialist who has worked on several ESCs in recent years.

The decision was based on it providing the most rock-solid reliable and flexible system option.

“The multiuser functionality and ability to control every fixture from every console and to alter fixture types to suit your needs were two big advantages of the MA architecture”, commented Collins, “plus the network’s overall stability and troubleshooting facilities”.

Once the installation was up and running and the production period commenced, Collins watched all the grandMA2 system monitors from his console and could read out every command and, if necessary, search the history, track down errors and pass the information back to the programming team.

Macros – another area where MA is very strong – were also an essential part of the lighting process for a show with short changeover times and many complex sets to accommodate. This enabled timecode information, presets, views, starting and preparing cues to be changed in an instant.

An MA onPC command wing located backstage was used for testing set and prop practical lights that were also integrated into the system for their slots. Some artists brought some truly impressive assets and staging effects with them!
The lighting fixtures were supplied by several leading manufacturers, a massive job which was co-ordinated via Danish rental company Litecom, including any extras packages requested by individual delegations.
The production also had to accommodate a show-stopping interval performance by the Queen of Pop herself, Madonna, whose creative lighting requirements were overseen by LD Al Gurdon.

Four dimmer city areas were connected via fibre and fed data and power to the whole rig. Three were located on a balcony running down one of the long sides of the venue - with cable runs added in via holes made in the wall. Dimmer City 2 was positioned behind the enormous upstage LED wall to provide power for the Matrix, which was built along the rear and sides of the stage area using Litecom’s MX Ladder system, holding a total of around 650 lighting fixtures.

Operating the main show lighting console was Angelo Di Nella (on a grandMA2 full-size). Joshua Cutts ran the audience lighting - also a major element of the broadcast - on a grandMA2 light. The key lighting was looked after by Ivan Eftimov on another grandMA2 light, all running with backup consoles.

Playback video was operated via another light run by Yahav Tenne complete with backup, while Moti Aroshas took care of the green room lighting, again utilizing a grandMA2 light with full backup. Dakar had a grandMA full-size on which he ensured that all the crucial key lighting levels and master intensities were spot on for the cameras ... and Collins’ system desk was also grandMA2 light.

Najar didn’t operate a desk on this occasion; however, he creatively directed the overall show lighting and each delegation’s lighting in conjunction with all the operators. Integral to the programming team were lead programmer Matti Murray, who ensured the night-time sessions ran productively and efficiently assisted by Chris Bolton.
The dazzling array of glitz, glamour and superlative pop music was delivered with characteristic style, multiple WOW factors and much vibrance by Melzig and his highly talented team. The 2019 ESC was memorable for many reasons including being won by Netherlands singer Duncan Lawrence and his co-written ballad “Arcade” - the first time NL has won since 1975!

A.B. Electronics is the exclusive distributor of MA Lighting in Israel.

grandMA3 consoles made their Super Bowl Halftime Show debut at Miami’s Hard Rock Stadium where they joined a complement of grandMA2 consoles to control video elements, stage effects and the LED…