grandMA3 is the right answer for The Answer Trap 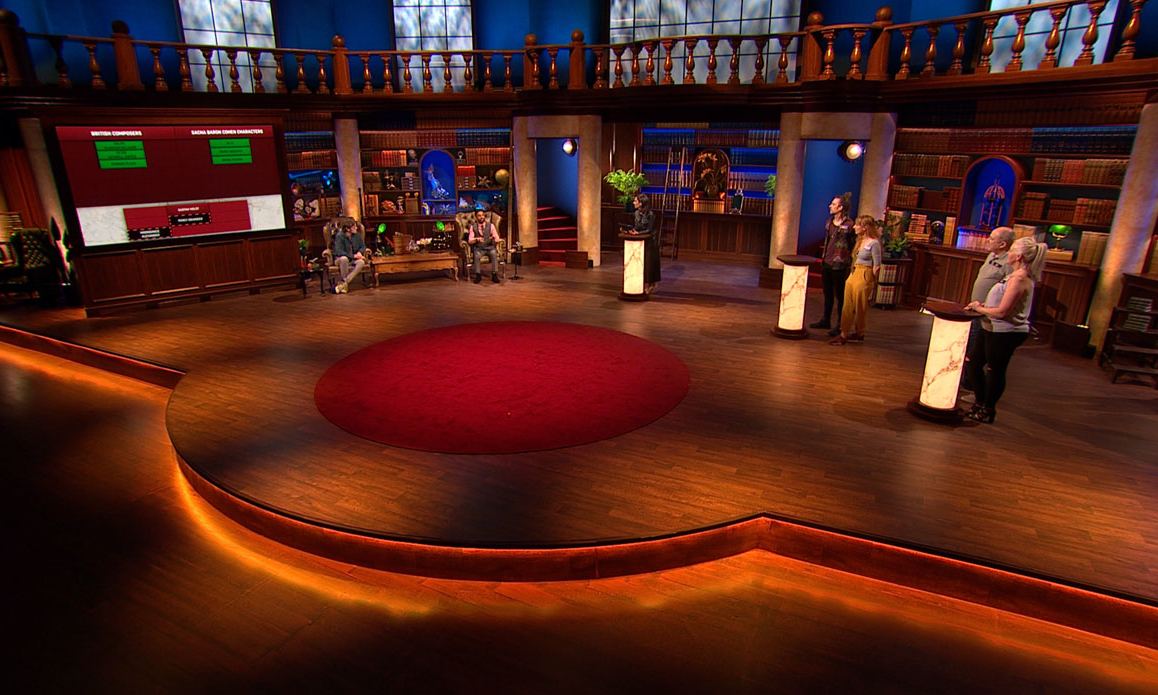 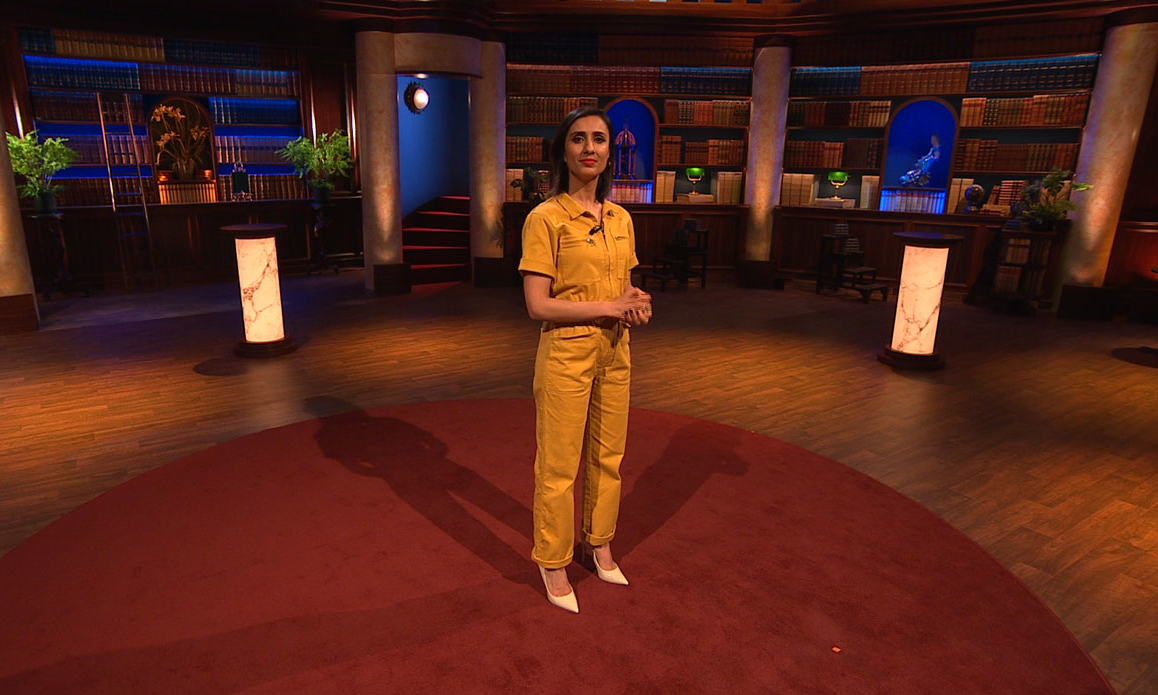 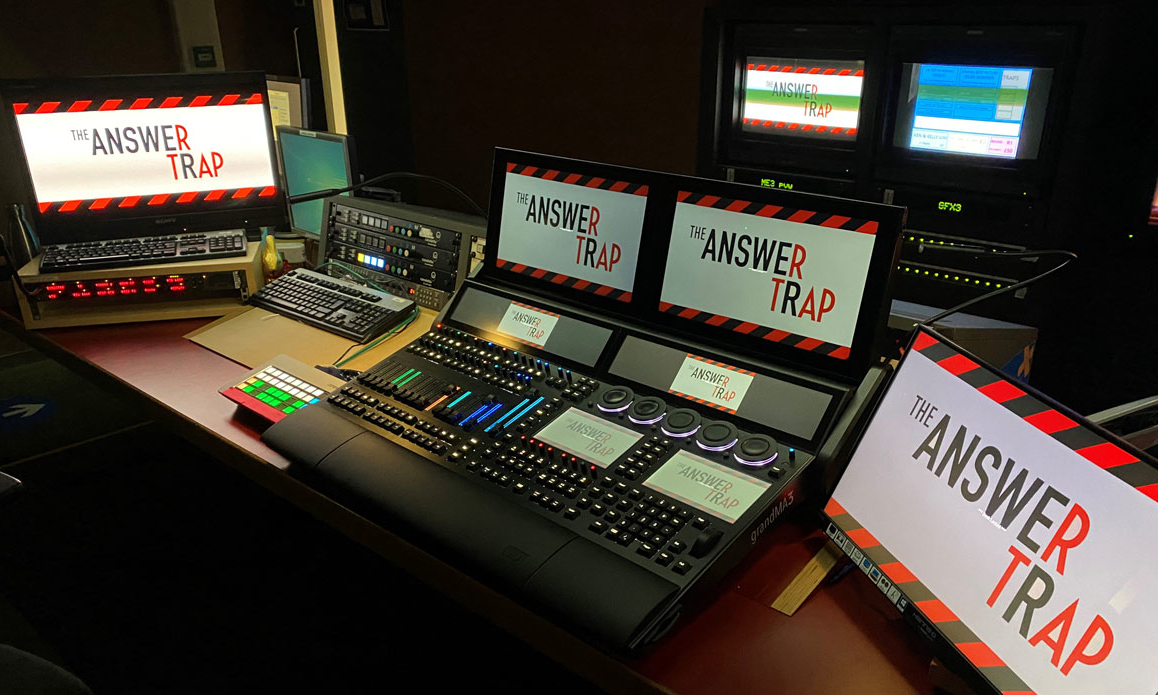 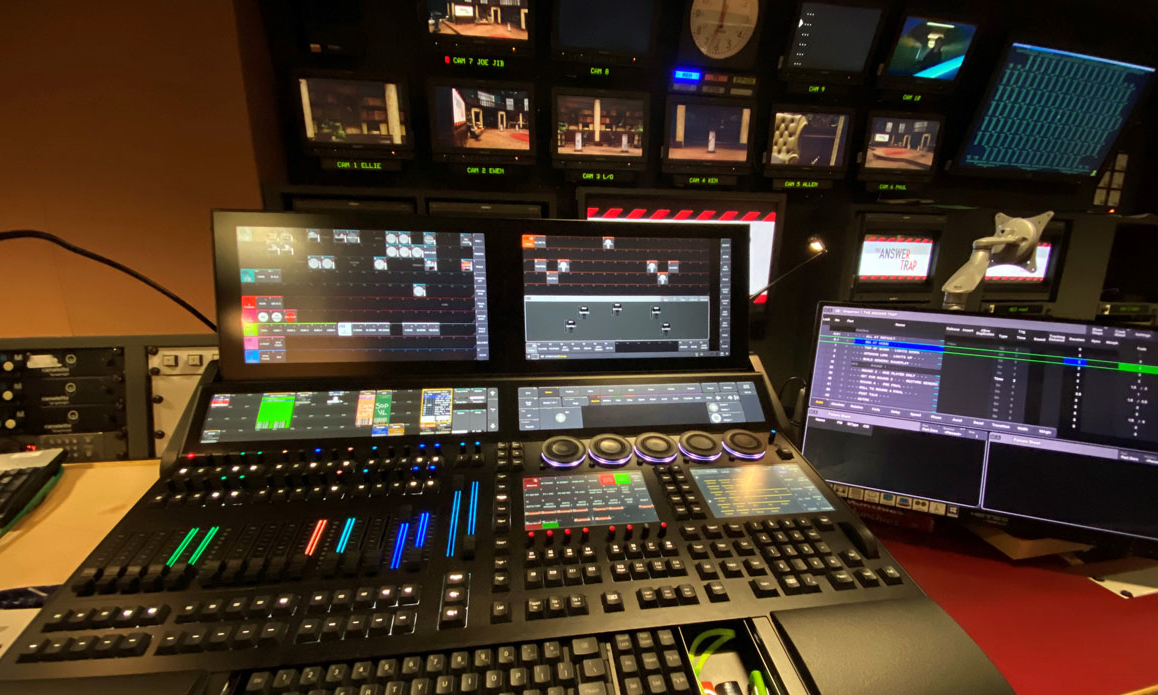 A grandMA3 hardware and software package was the lighting control platform of choice for The Answer Trap, a brand-new list-based UK TV quiz show for quick thinkers produced by the Objective Media Group and Motion Content Group and presented by Anita Rani for Channel 4’s daytime viewing.

Recorded at BBC Scotland in Glasgow, the buzz and excitement of producing this pacey and intelligent new series was added to with a fantastic visual mix of lighting – designed by leading TV lighting designer Roger Williams – and an eye-catching set created by Dominic Tolfts.

Roger worked with two talented lighting programmer / operators – Tom Dyson of TDLX and Dan Street of Street Light, and both chose to run the show on their own grandMA3 light consoles running grandMA3 software.

Tom took care of the show’s moving and intelligent lights on one grandMA3 light including 55 x moving lights from three different brands, plus 40 x LED strips and battens which were used for intricate set lighting including a variety of effects like colouring, texturing, and other accenting during the gameplay.

The set look was quite different to other quiz shows, styled like the library in a stately home – classical, elegant and full of detail which ideally lent itself to being lit, also bringing a scenic flourish of theatre – and plenty of drama – to the brain action!

“This was a really amazing set to light,” commented Roger, “Dom’s attention to detail was superb and the brief was to create a library, in the style of an old-fashioned reading room, with lots of wood, warmth and of course … books! We wanted it to look ‘real’ so my mission was to enhance the beauty of the set with slightly more saturated colours and a hint of coolness in amongst the warmth,” he explained.

Dan meanwhile looked after all the general white lighting and the vast detail required for properly key lighting the presenters and contestants on his grandMA3 for which he utilised five ‘tungsten’ LED moving lights and around 40 generic light sources.

Tom and Dan are both experienced grandMA users and programmers, they have both worked with Roger for some time and frequently work together as a team, enjoying a great synergy which is essential for capturing the visual language of the show from a lighting perspective.

Tom founded his company TDLX whilst at university in Huddersfield and started lighting drama and musical theatre in addition to working for an LED installation specialist where one of his projects was installing LED into the set of A Question of Sport which is where he met Roger.

The Answer Trap was Tom’s first full TV series using the full grandMA3 control – hardware and software – and although he had previously programmed a couple of smaller shows with the setup, these had not stretched the system to any degree.

Hardware wise, Tom likes the flexibility on the grandMA3, being able to place what you want where, and the ability to set up the console just as you like it. “Compared to grandMA2, the new GUI interface is even more customisable than before,” he stated.

Underlining that while he’s hardly scratched the surface in terms of exploring the grandMA3 software, he can already see the many possibilities and the power of new features like the Selection Grid and Phaser Editor which will be great for allowing more complex selections and building of FXs.

Tom thinks grandMA3’s “power and versatility” for all types of shows and productions, not just TV, is excellent, and loves the fact that “it is straightforward enough for a quick one-look show yet can be easily expanded through the grandMA3 network to run massive multi-console and multi-user environments!”

Ahead of the show, Tom and Dan discussed extensively and decided that while there are always many challenges in working on a new show, this studio-based scenario was an ideal opportunity to run with the grandMA3 package. This was reinforced by hearing how other colleagues had already had several successes running in other show formats.

Dan’s background encompasses theatre, opera and live events and his freelance career grew out of a long and fruitful relationship with London’s iconic Royal Albert Hall where he met many lighting designers and directors and ventured more full time into television.

“Choosing grandMA3 for this show proved to be a good decision,” he stated, emphasising that while some of the operational tasks on the console have a familiar feel, other processes are completely new and require a level of experimentation combined with some classroom-style learning to grasp the essence of the concept.

He also feels it is important to build a relationship with the platform’s developers and the whole MA Lighting team to give proper feedback, and both he and Tom note that the support from UK distributor Ambersphere Solutions is excellent in this respect.

Dan has always found the grandMA platform delivers reliability “consistently” in a world where schedules are ever tighter and the pressure to run to time is constant, and agrees that new functions like Phasers and the Selection Grid will prove powerful tools for creating complex effects in short timeframes.

He likes the ergonomics of the grandMA3 software and the ability to customise and easily add personal touches for how data is displayed on screen. He utilised the new Data Pools option – which would have been handy had he or Tom needed to merge data – and he can also see himself drilling down into the Recipe and Recast functions in the future.

In terms of the grandMA3’s physical appearance, Dan appreciates the sleeker and more streamlined styling, the improved key caps and touch screen functionality. “The hardware upgrade alone has certainly added overall to the end user experience,” he stated.

As well as owning a grandMA3 light, Dan has recently invested in a grandMA3 compact XT, “a fantastic portable console that is spot-on in relation to the size change from a light to an XT”.

The first series of The Answer Trap airs May 10th for six weeks on Channel 4 between 3 and 4 p.m. and will keep audiences on their toes as two teams each week are challenged to place answers from lists into a series of relevant categories some of which are cunning snares or ‘Answer Traps’ artfully laid to trick and ensnare contestants! The goal is to assign all answers into the relevant categories, avoiding the traps, to win cash prizes!

The Answer Trap is directed by Ollie Bartlett, the series producer is Julie Kelling and the executive producers are Ben Shephard, Ed de Burgh and Toby Stevens.

The lighting equipment was supplied by Richard Martin Lighting. Ambersphere Solutions Ltd is the exclusive distributor of MA Lighting in the UK.