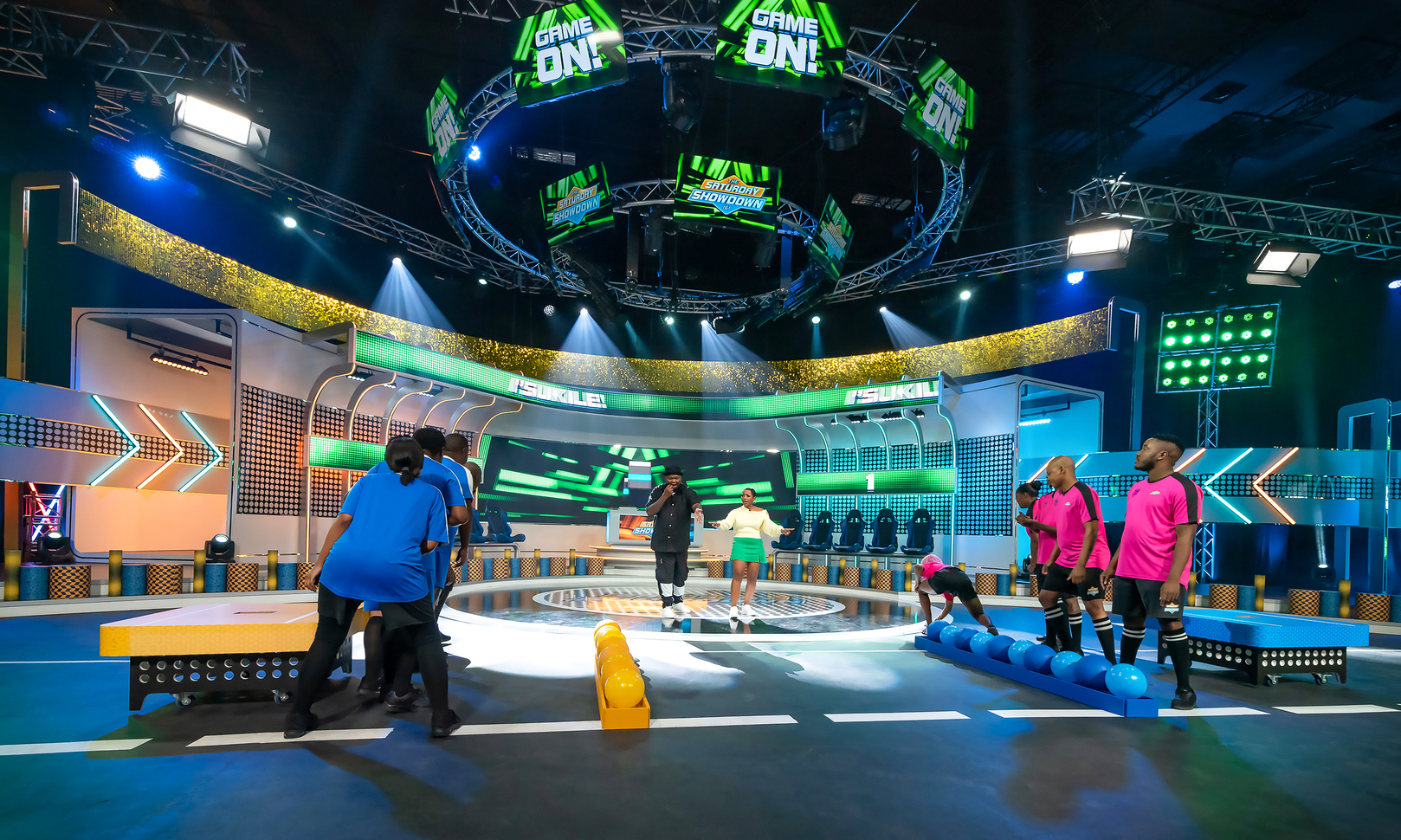 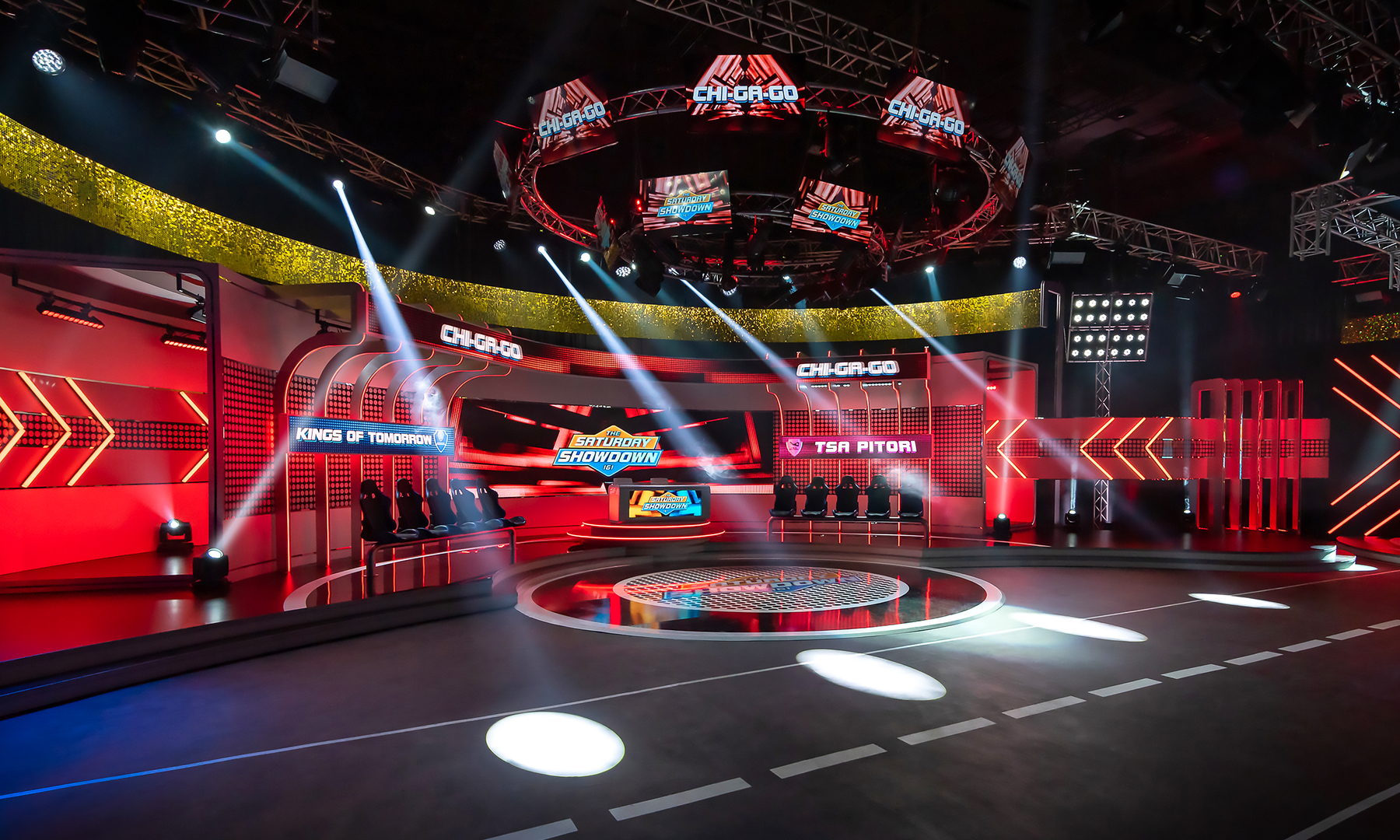 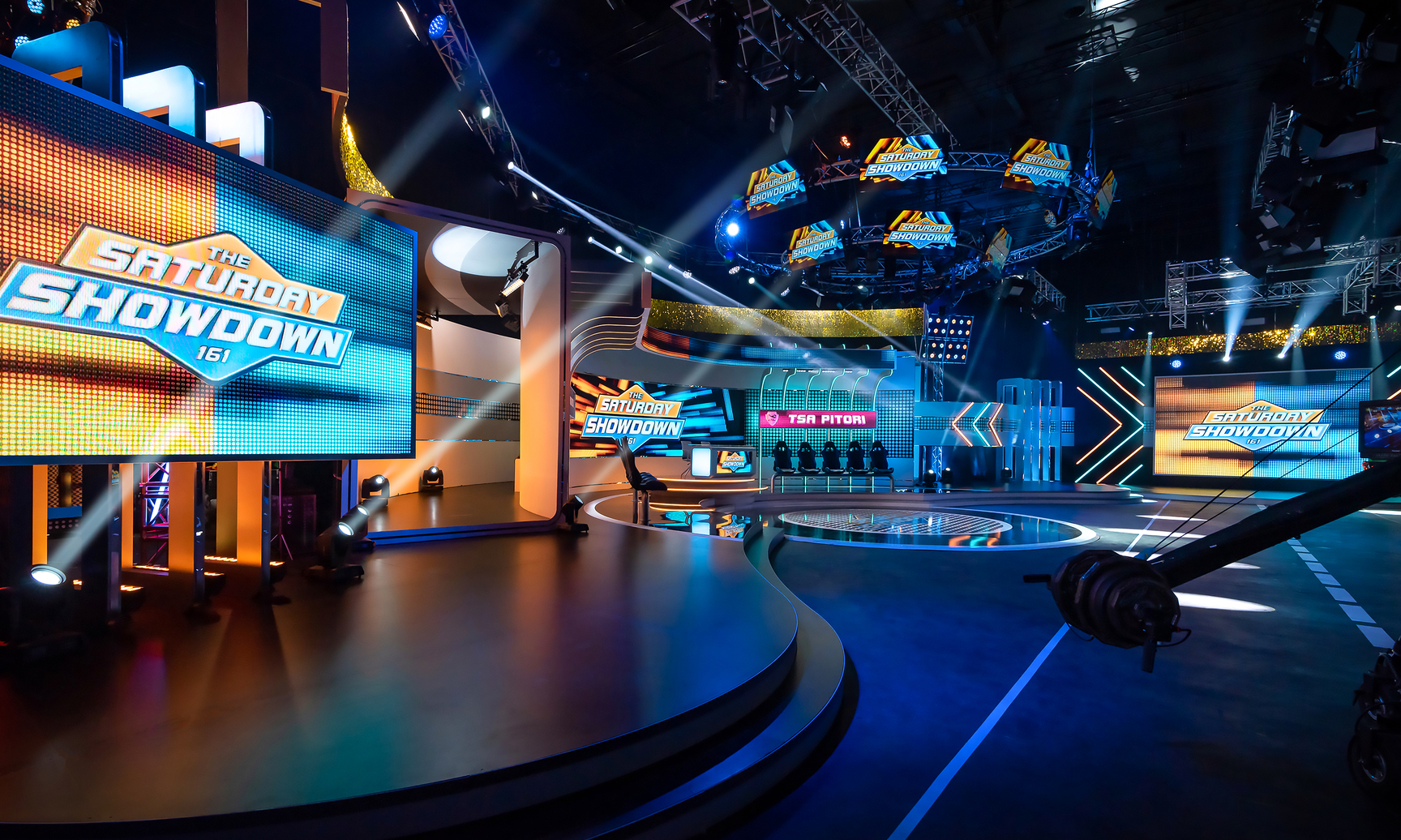 Lighting designer Ryan Lombard decided that South Africa’s newest DSTV games show “The Saturday Showdown” was prime time for him to make the switch to an all grandMA3 – hardware and software – solution to run lighting and video graphical content!

The show was recorded at Urban Brew Studio 10 in Johannesburg, and produced by Red Pepper Productions for broadcaster Mzansi Magic, and designed as an action-packed adrenalized sport-themed entertainment game show with BIG prizemoney to keep fans enthralled on Saturday nights while the Local and Premier Leagues take their break!

Ryan specified a grandMA3 light as the main console for graphics and lighting, coupled with grandMA3 onPC  running on a dedicated computer on the network accessed via a grandMA3 onPC command wing which was used to trigger all the reactive LX and AV cues as different sections of the games were played.

In the Showdown five teams faced off in the knock-out competition, competing in five rounds of games that tested both their general knowledge and physical coordination.

The set – designed by Michael Gill Designs and built by SDS – was divided into two areas, the Arena or Field, where the action took place, and the commentator / studio setup where the competitors were also seated for the relevant segments.

Fifty-two moving lights were on the rig and used for effects and precision lighting around and the Field with 60 x Sceptron LED pixel battens (and their own controller) utilised as set eye candy also being run from the grandMA3.

Substantial quantities of LED strip were part of the set ‘practicals’ as well and there were 62 LED fixtures for set specials, keys and arena lights with another 120 x LED PARs for ‘stadium lights’, up lighters, and truss warmers – an eclectic mix which were skilfully combined to produce a slick and stylish look.

Eight individual video feeds controlling digital content appearing on the multiple LED surfaces around the studio were received from a Hippotizer Boreal+ Mk 2 media server into the grandMA3 system. Many of these were related to what was happening with the gameplay e.g. when the teams won a game or scored goals, etc., and were triggered via the console together with the lighting cues.

“I thought this was an ideal scenario to make the transition to grandMA3 and stay current and using the latest and most powerful control technology,” commented Ryan who was very keen to see the grandMA3’s capabilities, having been an MA advocate, user, and programmer for many years.

He likes the grandMA3 buttons, their layout and ergonomics including the tactility and the way they press, however it was the console’s Phaser engine that blew him away, and that he most enjoyed using on this project.

Within just a couple of days, Ryan became familiar with the complexities and power of the Phasers – a fantastic tool for programming dynamic effects – and just what was achievable with the Phaser Editor.
“I soon felt really comfortable figuring out how to set up some of the more advanced functionality and especially the cues involving the media server,” he noted.

“It was an absolute blast using the desk and the grandMA3 system,” he enthused, when asked for an overall assessment.

Ryan tapped into multiple systems for this show running a multi-user session for the main lighting console and the games console, together with MA-Net3 for the lights plus Art-Net and HippoNet for the media server to access and control the graphical systems.

Multiple feeds from the control room were fed into the MA system to switch between example cameras, the games computer live feed and the live scores. The live score images had to be split and chrome keyed later to remove the background so other graphics could be overlaid – all controlled from the grandMA3 and the media server.

“For sure it was a big learning curve,” he admitted, “especially incorporating all the video elements, and it is an intricate tool that takes some figuring out … But it’s a huge lot of fun to use!” he declared, extremely pleased with the outcome.

He also appreciated the generally much “cleaner and more streamlined” grandMA3 user interface.

Naturally, the “outstanding” support from local MA distributor DWR was “brilliant as always,” confirmed Ryan. It was their expertise and experience that assisted him in such an accelerated learning process and getting competent on the console very quickly, after just one day of training with DWR’s Jaques Pretorius and Bruce Riley.

After all of this, he was ready to explore and enjoy the grandMA3 himself and looks forward to future projects using its exciting and unparalleled control potential.